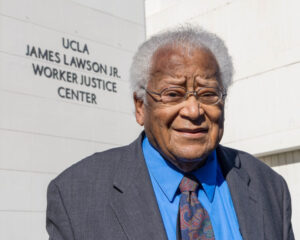 A downtown office for the UCLA Labor Center had been a long-term dream of Director Kent Wong who commented, “It would be hard to find a better site for the Downtown Labor Center, located near the majority of LA’s union halls and worker centers and in the heart of a diverse immigrant community.” The DLC not only bridges the university and the Los Angeles labor community but also supports collaborative projects between unions, worker centers, and the broader community.

On December 11, 2021, the UCLA Labor Center’s historic MacArthur Park building was officially named the UCLA James Lawson Jr. Worker Justice Center in honor of Rev. James Lawson Jr., one of the civil rights movement’s most-prominent leaders of non-violent protest and a UCLA labor studies faculty member. Naming the building in honor of Lawson forms part of a $15 million effort to renovate the Labor Center funded by a one-time allocation in California’s 2021-22 state budget. Renovations on the building will start in mid-2023 with the support of this historic allocation and ongoing contributions from our supporters and friends.