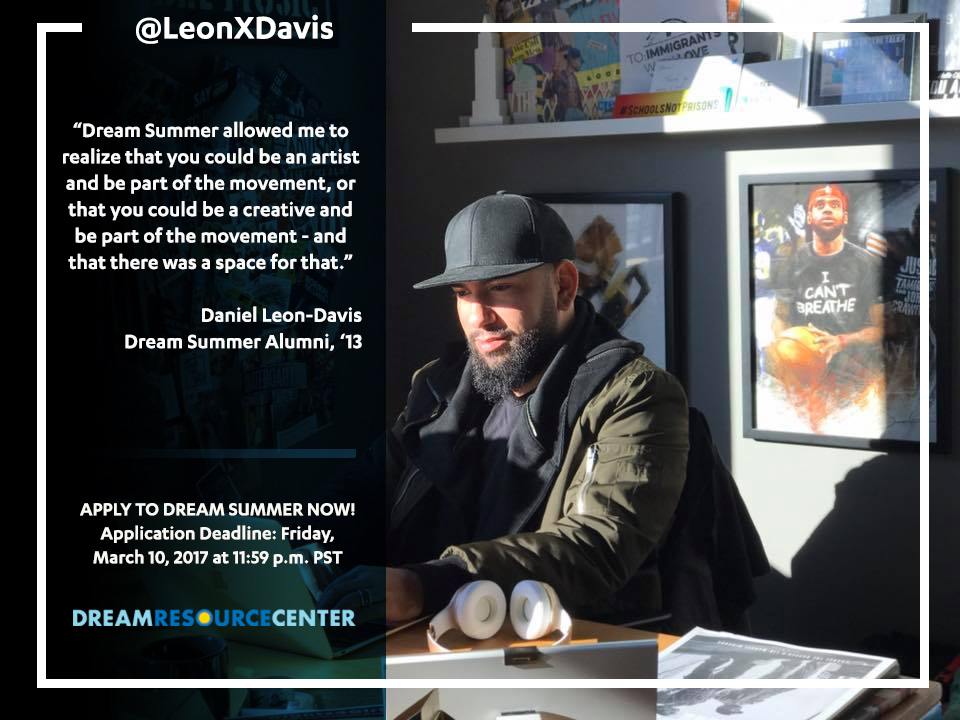 Daniel Alejandro Leon-Davis is at the front lines of changing the narrative around human rights, centering the too often rejected segments of the LGBTQ and immigrant communities. As both a formerly  undocumented immigrant and gay Latino, he lives #BeyondTheFear as an artist and creative, finding inspiration all around him.

Daniel is a graduate from Seminole State College and American University. Shortly after, Daniel went to work with Michael Skolnik as his Chief of Staff.

Daniel is the Co-Founder and Senior Creative Director at SOZE, as well as the Social Media Director for Russell Simmons (@UncleRush).  He currently resides in Brooklyn with his husband Dom and their 14-year-old Jack Russell named Ralph.

I can’t remember the exact person who told me, but I participated Dream Summer 2013. I came out as undocumented in 2011 and I was looking for opportunities. I was getting ready to graduate from college and I was really afraid because I didn’t know what opportunities I would get being undocumented. It was really hard to watch all of my friends go on and get internships at big organizations and do all these amazing things. A number of people who told me about Dream Summer asked if I was applying, so I decided to apply.

2. What was one thing that you learned during your fellowship or one takeaway moment from the whole experience?

One of the take-aways was seeing how community came together to make things happen. I was very lucky to be in Washington, D.C. when I came out as undocumented and was very much supported when coming out. For the first time, it was even more important to build a community of people through Dream Summer that were undocumented and could honestly stand next to me. It’s a very unique experience to be undocumented in the United States and to be a millennial, so to be able to build that community was really important. The second take-away from me that has always sort of stuck with me is around the need to diversify the movement. As a Latino, I have the privilege of having a community that oftentimes gets portrayed through media around undocumented issues, but I made friends in the program that identified as black and very much wanted to expand the movement. I know that Dream Summer has since expanded, but that was one of the biggest take-aways because it is something I think about with the work I do now.

3. Do you have a favorite Dream Summer memory?

I’ll do two again. So for Dream Summer, we were all in Los Angeles at our hotel and there were a number of us that wanted to go out, grab some dinner—at least be able to hang out and I remember that two or three people forgot their ID’s. So, we were like, ‘You know what? Why don’t we do something small in one of our rooms?’ I offered up, I got some people to organize and I was like, ‘Let’s all hang out, so that that way, we are all together rather than going out?’ We ended up with so many people in a room and everyone sort of came together in community. I’ve never forgotten that because it was one of those solidarity moments. I remember not having an ID, or just forgetting, but not having it is probably one of the biggest cases in the undocumented movement, especially before DACA. In regards to my memory at my actual fellowship, I got to be placed at the Advancement Project and one of my biggest memories was the fact that I went in there as the only fellow who wasn’t in law school. I got the offer to do some creative work and it’s helped shape some of the work I do now because I didn’t think that I would be doing creative work in the same way. I produced a video for the school to prison pipeline that Advancement Project continues to use.

4. How do you think Dream Summer shaped, helped advance, or provided a platform for you to move forward in your career?

Dream Summer did two things. The first was help me build a community of people who were leaders or would become big leaders in the immigration reform movement. To this day, there’s people I call upon from my Dream Summer cohort like, ‘Hey, can you be part of this project that I’m working on?’ and so forth. The intersection of what I learned during Dream Summer allowed me to be one of the creative leads for a project I work on with FWD.us called “I Am An Immigrant.” I’m the senior creative director at SOZE and through that agency I get to do work, including building the “I Am An Immigrant” campaign this last year, as well as help build Immigrant Heritage Month, which we started three years ago; this coming year will be the fourth year celebrating Immigrant Heritage Month. Dream Summer allowed me, because of the fellowship I had, to realize that you could be an artist and be part of the movement, or that you could be a creative and be part of the movement and that there was a space for that.

5. What drives the work that you do at SOZE?

One of our biggest principles is that we’re a values-based company, so our three values are authenticity, compassion, and equity. I would say that the authenticity piece really drives me and it drives me because it’s powerful to see people from communities be part of the work. We have so often seen allies, who obviously are well-intentioned, do the work without consulting people from the community. At SOZE, that is something big. For example, we had someone who was DACAmented, another former undocumented person, and I working on Immigrant Heritage Month and ‘I Am An Immigrant’. We have two young women of color, working on our project with the California Endowment (Sons & Brothers) aimed at changing the narrative around people of color. That’s what drives my work at SOZE: being able to see authentic stories told or expressed through people who have experienced whatever it might be that we’re talking about.

6. If you could share one piece of advice with individuals, what do you think that would be?

One of the biggest pieces of advice from me would be realizing how big your community is and not being afraid to tap into it. I was undocumented and after I finished my Dream Summer fellowship, I moved to New York on a whim. I wanted to move, but I moved not having any job lined up, being undocumented, not knowing what was next. I took a chance and reached out to someone in my community to introduce me to Michael Skolnik, who would in turn become my boss, now my partner in crime at the agency. Everyone always talks about, “Oh Daniel, you made all this for yourself, you did that,” but community is such a big piece, not being afraid to reach out to the community. Sometimes it can be scary to reach out to people you don’t know or to reach out to people who you feel won’t give you the time of day, but in reality it’s sometimes just saying, “Hey, I really want to work within this scope or within this industry and you’re someone that I admire, how can I work with you?”

7. What are your future plans?

I used to be one of those people that planned like crazy and was like, “In five years, this is what I’m going to be doing!” But what I’ve realized is living in the moment and that sounds so cliché, but it’s become so important to me. The only thing I really plan on doing in the future is ensuring that more young people of color and immigrants are given the power and knowledge to know that they can work within the creative industries to make change. That they can use arts, fashion, graphic design, film, photography or whatever the case might be. I want to make sure that more young people of color and that immigrants are given the space and privilege to be creatives while also obviously continuing to rise up for our communities.

Note: Note: A big thank you to UCLA student Josefina for putting together Daniel’s alumni spotlight. This couldn’t have been possible without Josefina’s help!