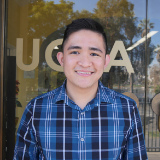 Anthony Ng is a nationally recognized leader in the immigrant youth movement who firmly believes that directly impacted community members have a key role in leading and shaping social movements. He has dedicated the majority of his professional career to understanding how policy and grassroots intersectional organizing can be used as a tool for social change. As an experienced advocate and organizer, Anthony has worked on innovative campaigns at the local, state, and national level. Anthony has also served in many leadership roles for organizations like United We Dream’s National Coordinating Committee, the California Community Foundation’s Council on Immigrant Integration, and the California Immigrant Policy Center’s Steering Committee.

Anthony’s passion for immigrant rights and social justice was sparked in 2012 when he participated in the Dream Resource Center’s Dream Summer fellowship. The program shaped the trajectory of his professional and public life. Since 2012, Anthony has been a staunch leader in the immigrant rights and social justice movement. Some of his proudest accomplishments include co-founding UPLIFT—an undocumented Asian and Pacific Islander youth-led organization in Los Angeles—and being recognized by Clergy & Laity United for Economic Justice (CLUE) as an “Emerging Giant of Justice.”

Anthony graduated from the University of California, Irvine with a BA in Political Science and is currently part of the inaugural cohort for the John W. Mack Movement Building Fellows program by the Weingart Foundation.