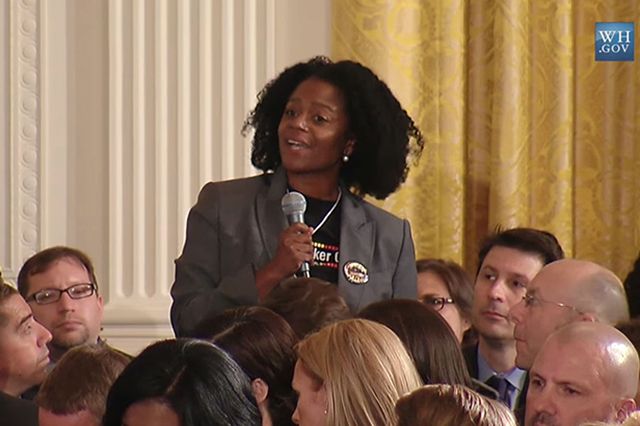 When the White House and the U.S. Department of Labor brought together workers, labor leaders, advocates, forward-leaning employers, members of Congress and others to the first-ever White House Worker Voice Summit on October 7, the Los Angeles Black Worker Center’s Lola Smallwood Cuevas was among them.

Smallwood Cuevas was invited in her role as founder of UCLA’s Los Angeles Black Worker Center, which strives to increase access to quality jobs, reduce employment discrimination and improve industries that employ black workers. The center accomplishes this by building the leadership of black workers and promoting practices that create quality jobs and a more equitable workforce. Smallwood Cuevas also serves as project director of the UCLA Labor Center.

The White House summit explored how workers can make their voices heard in the workplace in ways that are good for workers and businesses.

Smallwood Cuevas took part in the panel discussion, “Community + Worker = Stronger Voice.” Among her co-panelists was prominent civil rights activist Wade Henderson of the Leadership Conference on Civil and Human Rights, with whom she discussed ways that community groups, employers and unions work together to create good-paying jobs with benefits that help families prosper.

Black workers face nearly double the unemployment rate of the general population nationwide. In L.A. County, nearly half of working-age black adults are unemployed or working in jobs that pay $13 an hour or less. In addition to developing community leaders that can share their stories, the center also houses the Ready to Work program, which mentors participants for eight weeks to prepare them for building and construction apprenticeship programs.

During a conversation between President Obama and summit participants, Smallwood Cuevas was called upon to describe the Black Worker Center’s innovative work.

“We are hoping to see changes that will really allow us to modernize the industry culture,” she said. “This way we can ensure that African American workers and women have an opportunity to make construction a career that can support them, their families and their communities.”

Obama responded by describing the opportunities that investment in the country’s infrastructure would present.

“Smart policies that finance the $2 trillion worth of infrastructure repair that we need in this country would be a really powerful tool to give workers more voice,” the president said. “Those transportation or public works projects that are taking place in your community, Lola, now provide a platform for apprenticeship programs and a pipeline for bringing the unemployed into the job market.”

“I felt such a great sense of pride, purpose and possibility to be a part of the summit. It is so powerful to have worker voices and experiences lifted up in the nation’s highest office,” Smallwood Cuevas commented after the summit. “In our work at the Black Worker Center, we know that the black job crisis is not an individual deficit problem but a systemic problem that requires a collective approach and solution. No work or bad work is a daily thing for workers in our community.”

The L.A. Black Worker Center is a community-labor project incubated at the UCLA Labor Center that also serves as a community partner and a site for UCLA students to participate in internships, field research and service projects. It recently helped launch a sister center in partnership with the UC Berkeley Labor Center.

Read the full article on the UCLA Newsroom.