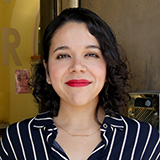 Citlalli is the Communications Director at the Institute for Research on Labor and Employment (IRLE). She is committed to raising media awareness about the struggles and stories of working people to ignite social change. Prior to joining the IRLE, Citlalli was a Communications Specialist for the UCLA Labor Center’s ReWork project, a project dedicated to low-wage worker research. Citlalli’s passion for media and communications was awakened through her involvement in the immigrant rights movement where she contributed to numerous media campaigns. Citlalli worked for SEIU-USWW where she advocated for the rights of Los Angeles janitors as an Internal Organizer and Political Coordinator, she later joined the Alliance for California Traditional Arts (ACTA) as a Project Coordinator, lead the public relations and marketing efforts for an LA-based music project, and was a freelance writer for various online publications. She received her academic training in Political Science (B.A.) at California State University Fullerton and Latin American Studies (M.A.) at UCLA.

April 20, 2021 The American Prospect - Black Worker Centers: Building Workplace Power in the Communities
April 16, 2021 VN Explorer - Vietnamese salon workers in US devastated by pandemic, hate attacks
April 15, 2021 The Atlantic - The Infrastructure Bill Should Look After Our Future, and Our Past