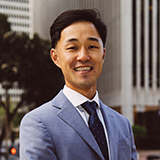 Ju Hong (he/him/his) is the Director of the UCLA Dream Resource Center (DRC), a program team of the UCLA Labor Center that empowers immigrant youth and allies to be at the forefront of social justice movements. Ju Hong has over a decade of experience in the immigrant rights movement and is an alum of the DRC’s 2011 Dream Summer fellowship cohort.

Since completing the fellowship, Ju has been actively involved in the immigrant rights movement, organizing the community and advocating for immigrant rights issues. In 2013, Ju challenged former President Obama on his administration’s record number of deportations during a presidential speech at the Betty Ong Center in San Francisco, California. His courageous action appeared on national and international media, including the New York Times, Washington Post, CNN, and BBC News. Ju also contributed and published immigration articles on the Huffington Post, Korea Times, and Politico.

Ju often shares his immigrant story at conferences and universities to educate and inspire people to take action on immigration issues. The 2016 documentary Halmoni uplifts Ju’s experience as an undocumented immigrant from South Korea and his bold advocacy in the pursuit of justice for immigrants. From 2016 to 2019, Ju served as the Governmental Program Analyst at the Immigration and Refugee Branch of the California Department of Social Services, where he oversaw a $45 million immigration services budget that funds over 100 community-based organizations to provide legal services and education to immigrant communities throughout California.

Ju currently serves as a board chair of the National Korean American Service & Education Consortium (NAKASEC), a nonprofit that organizes Korean and Asian Americans for social, economic, and racial justice. He is also a member of the Leadership Council of Immigrants Rising, an organization that provides resources and support to undocumented people so that they are able to build a brighter future for themselves and their communities. Ju also brings awareness to the unique stories of Asian undocumented individuals living in the United States through his podcast the ImmigrAsians.

In his spare time, Ju enjoys traveling, dancing, and spending time with his family dog, Mocha.