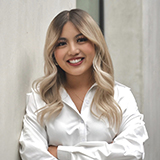 Justine Lim is a project coordinator at the UCLA Labor Center. Her passion for immigrant rights and labor advocacy stems from the injustice and exploitation her mother experienced as an undocumented immigrant worker. While laws in the United States have worked to restrict and exclude undocumented immigrants, Justine became fascinated with how the law can be used as a source of empowerment to fight back unfair systems. What began as a fight to access higher education transformed into a fight to improve the lives of all undocumented immigrants.

Justine recently graduated summa cum laude from UCLA, with B.A.s in Labor Studies and Political Science. At UCLA, Justine served as the external advocacy representative for Improving Dreams, Equity, Access, and Success (IDEAS), where she fiercely advocated for undocumented immigrants, strengthening relationships with immigrant rights organizations statewide. Additionally, Justine led a workteam for the first UC-Wide California Immigrant Youth Movement class, where she developed a detailed plan for a UC-wide Undocumented Student Week of Action and contributed to the fourth publication on immigrant youth with the UCLA Labor Center. While interning at the CA Labor Commissioner’s Office, Justine took advantage of the unique opportunity to dig deeper into the intersection of immigration and labor by investigating instances of workplace violations in low-wage industries, focusing on undocumented workers.

Through education and understanding the law, Justine is passionate about empowering immigrant communities to become their own advocates. This past summer, Justine served as a Dream Summer fellow, leading efforts to coordinate the 2022 Racial Justice Workshop Series by bringing together prominent activists and leaders to engage in critical conversations. Justine is excited to continue with the UCLA Labor Center as a project coordinator and lead the Asian American Racial Justice Project, where she works to build community among undocumented Asian and Pacific Islander immigrants and increase opportunities for cross-racial solidarity work to combat anti-Asian hate.