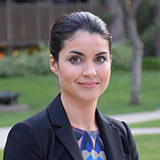 Kendy Rivera Cárdenas is the Senior Public Administration Analyst with the Labor Center’s Global Solidarity Project and teaches in the César Chávez Department of Chicana/o and Central American Studies. Kendy is a transborder activist scholar whose work builds-upon community engaged research practices, applied qualitative research, intersectional solidarity, and Chicana/o/x and Latina/o/x/e citizenship and politics in the Global South. Kendy received her doctorate in 2020 from UCLA’s César Chávez Department as a member of the first graduate cohort, a Eugene Cota-Robles Fellow and a legacy Andrew W. Mellon Fellow. Kendy has published several articles and book chapters on engaged activist scholarship, Chicana/o/x experiences in México, and spatial inequality at the U.S.-Mexico border.

Kendy’s commitment to bringing public universities and grassroots movements closer together led to her training in the Labor Center’s 2013 Community Scholars Program on “The Politics of Nonviolence.” Later she served as the teaching assistant for the 2019 programming on “Interfaith Models and Best Practices for Sanctuary in L.A.” In 2021, she became the co-instructor to the first trilingual and multinational class on “Cross Border Solidarity Towards Transborder Migrant Justice.”

Kendy was born into a Los Angeles-Tijuana transnational activist family unit providing humanitarian accompaniment at the Mexican border for over half a century. Since 2018 and into the present, she has further honed into her ancestors’ footsteps by accompanying displaced people on the move and in struggle throughout North America and Mesoamerica. Kendy is a queer Chicana feminist and holds mixed Wixárika and Jewish ancestries.