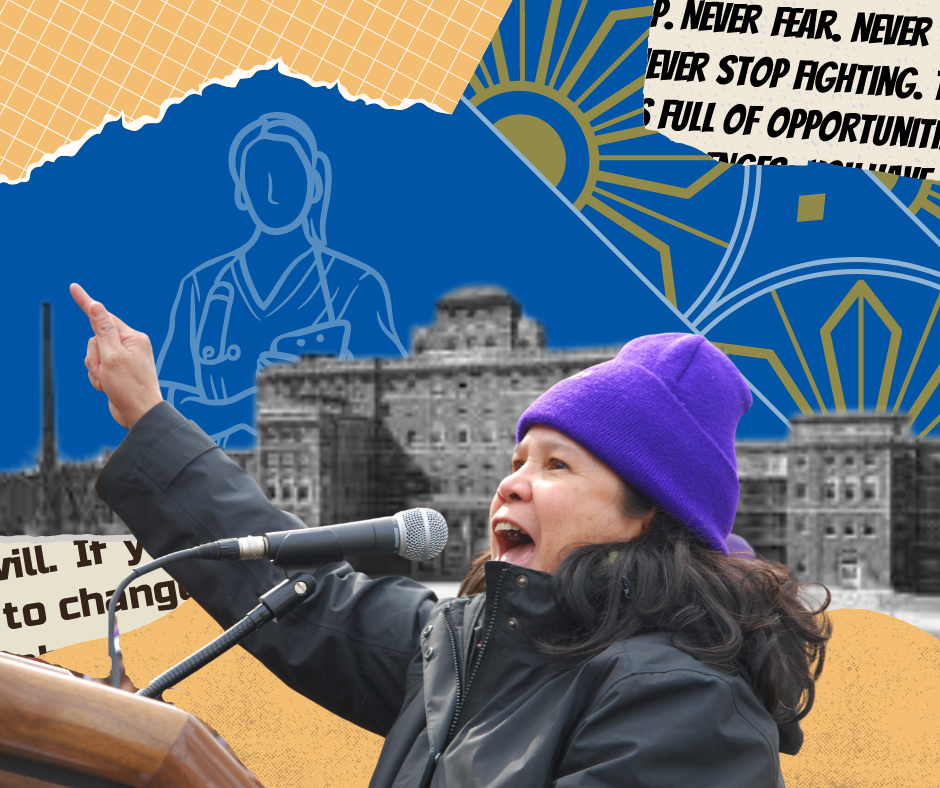 Maria Castaneda, Secretary-Treasurer of 1199SEIU United Healthcare Workers East, the largest healthcare union in the nation, tells the story of her first assignment as a young labor organizer.

Before becoming one of the highest-ranking Asian labor leaders in the United States, Maria Castaneda started her career on the ground floor of St. Barnabas Hospital in the Bronx, New York.

In 1984, she left her hometown of Quezon City, Philippines, alongside her husband and 7-year-old daughter. A 29-year-old community organizer for human rights causes, Maria had been recruited by 1199SEIU United Healthcare Workers East to move to Queens, New York, where she would work as a labor organizer specializing in the registered nurses’ division.

Every morning, Maria embarked on a 2-hour commute by bus and subway to the Bronx, where she was tasked with convincing healthcare workers across all classifications — nurses, housekeepers, nurse’s aides, professionals — to vote in favor of union representation. She would time her arrival for 6:30 a.m. so she could catch workers at their shift change. After a 12-hour wait in the hospital’s cafeteria, she would do it all over again.

Her first assignment was to stop a wave of decertification elections — votes to remove a union from a workplace — that were sweeping New York’s hospitals. Two nearby hospitals had already voted to revoke their union representation. St. Barnabas’ vote was up next.

As she spoke with workers, Maria began to notice a racial divide. While longtime Caribbean and African American nurses were pro-union, many of the hospital’s recent hires were apprehensive. They were immigrants from the Philippines and Ireland who were only able to come to the U.S. due to a work visa sponsored by the hospital.

For the Filipino nurses in particular, this relationship triggered a core cultural value: utang na loob. Translated to “a debt of gratitude,” utang na loob signifies a deep, interpersonal indebtedness that is difficult to measure or ignore.

“It was a really hard-fought struggle,” Maria said. “If you were recruited by your employer, and your employer is the reason why you are in America, and now you will go against them — that’s really a very hard decision to make. I can understand that the Filipino nurses were really torn between their gratitude and, at the same time, they felt solidarity with their fellow nurses.”

Maria looked for ways to bridge the gap between the union’s mission and the Filipino nurses’ values, with the end goal of building multiracial unity across the nurses. She began to cultivate relationships with them, learning about who supported unionization, who opposed it and whom she had an opportunity to convince.

“[Hospital management] saw the foreign nurses, Filipino and Irish, as a vulnerable group,” Maria said. “I could not accept the Filipino nurses being the group that will bust the union.”

At the core of Maria’s strategy was a deep understanding of Filipino culture. She said that while other organizers stuck to “one-size-fits-all” tactics that were confrontational and adversarial, Maria knew that unwavering respectfulness and warmth were essential to earning her fellow Filipinos’ trust. When hospital management flew a beloved former nurse educator — respectfully known by the nurses as ate and tita, terms of endearment for an older sister or aunt — back to the hospital to dissuade the nurses from unionizing, Maria mirrored their respect, exchanging greetings with everyone regardless of their affiliation.

“That worked — even with the ate! I would say, ‘Good evening, po. How are you? Kumusta, po.” Maria said. “I feel as a Filipino, I have that advantage of understanding the culture, where these Filipino nurses are coming from.”

Although they exchanged pleasantries in return, hospital management did not cut corners in their fight to achieve decertification. They hired security guards to meet Maria at the entrance of the hospital, surveil her in the cafeteria and escort her to the restroom. They removed the outdoor bench she would sit on as she waited to talk to nurses at the end of their shift.

“Having my experience in the Philippines of martial law, I’m not intimidated by security guards,” Maria laughed.

She taught non-Filipino organizers how to transform their methods and focus on educating the immigrant nurses on their workplace rights.

After three months of campaigning, 1199SEIU won the final election by one vote. Maria’s work was decisive in proving the union’s ability to successfully organize immigrant workers.

“Management thought they would really win. They even had champagne in the cafeteria ready for celebration after the count,” Maria said. “And then the count came, and we won by one. I was sad because, only one? And then my boss said, ‘Maria, we won! Even if it’s one, we won! The union will stay, and then we will have time to build.’”

Maria has remained with 1199SEIU for 38 years, and many of the Filipino nurses she organized recently celebrated their own 35-year anniversary at St. Barnabas. Today, she holds the second-highest role in her union, which now represents more than 450,000 healthcare workers in New York, New Jersey, Massachusetts, Florida, Maryland, and Washington, D.C. She also serves as a vice president of the 2.1 million-member SEIU. Throughout her career, she advocated for the Immigration Nursing Relief Act of 1989, which granted permanent residency to thousands of U.S.-based Filipino nurses; expanded 1199SEIU’s worker training and wellness programs; developed a new labor-management relations model; raised millions of dollars in disaster-relief funding; and helped promote Filipino cultural heritage along the way.

“If you enjoy the work, you don’t feel stress,” Maria said. “I enjoy the challenge. And I like empowering people. So that’s what I enjoy in the work.”