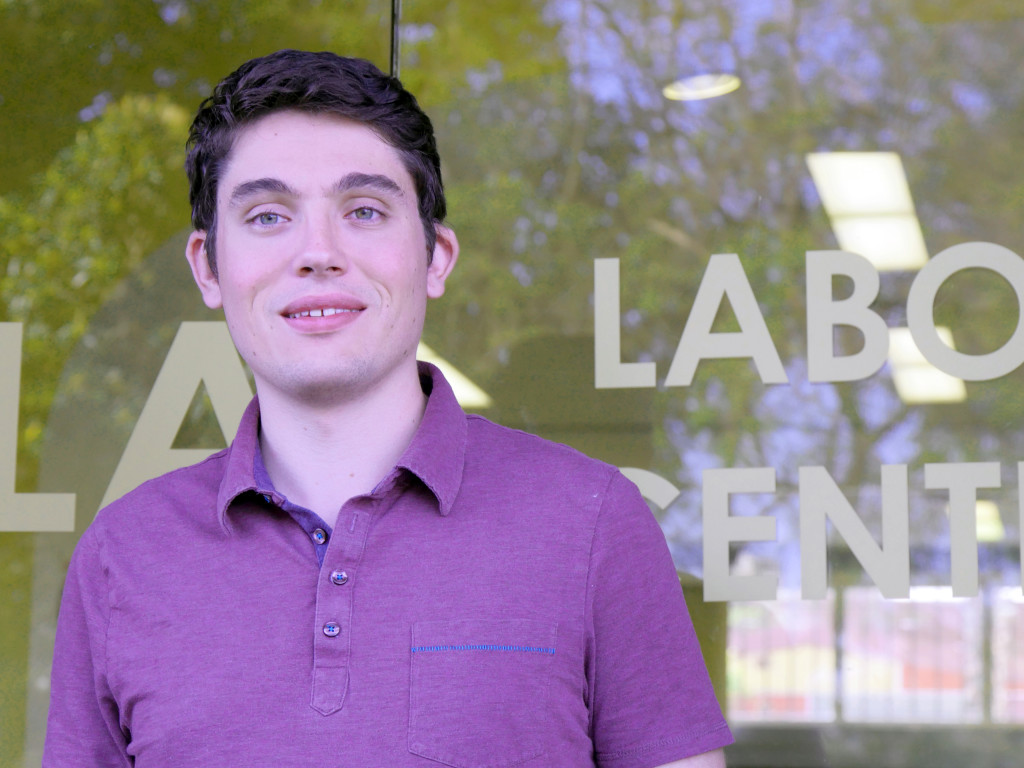 The Dream Resource Center would like to welcome Vlad Stoicescu Ghica! He is the new Logistics Coordinator for the Dream Summer Fellowship. At 23, Vlad is an avid runner and NBA fan with a nerdy side. Read on to find out what he has to say.

Do you have any personal connection to the undocumented community?

I’m undocumented, I currently have DACA. I’m originally from Romania; I came to the US when I was 9 years-old with my single mother. We came on a visitor’s visa. She was promised work here by a company that said they were going to sponsor us and take care of our papers. As it turns out, they were lying to her and we fell out of status.

We have a decent amount of family here that are citizens. They actually came to the US in the 70s and 80s under asylum provisions and they got taken care of because they fled the country at the time. They are very non-supportive of my mom and I being here and very much shutting us out. They’re immigrants, but they’ve forgotten their background. There also isn’t a larger community of Romanian folks that we could connect with. So, we’ve just always been on our own — it was just me and my mom growing up. Growing up, my mom worked multiple jobs at a time, housekeeping, cleaning, cooking. My mother is very educated — she used to be an attorney in Romania.

What would you say are specific struggles undocumented Eastern Europeans face?

It’s such a niche group that it is rare that you connect with each other, that you encounter each other. Either people stay silent about their status or something will happen that helps them resolve their papers a little bit easier, but they usually don’t identify themselves as undocumented. I think this is mostly because of the Latino-centric lens that the media pushes on the undocumented experience.

When you’re white or white-passing, you acknowledge the privilege you have when you step into a university or institutional space. That gives you a lot of advantages that other folks don’t have, and it shows in the way that people within the institution itself treat you. On the flip side of that, I think you get a lot less exposed to the existing support systems, you don’t really see yourself as being part of this greater issue that is affecting other folks, and, as a result, you don’t end up with a concentrated sense of community around these issues.

What’s the biggest difference between living here and living in Romania? Do you remember?

The first thing I noticed when I was a little kid was that people live in houses here rather than apartment flats in tall apartment buildings like in the city where I’m from, Bucharest, or in most of Europe, really. So when I got here I walked into somebody’s home in the US and thought, “Wow, this place is huge!”

Also, the diversity here is a huge difference. It is really wonderful that there are people from all sorts of different backgrounds and perspectives. That’s not something that I really grew up with, so those are things that I’ve come to appreciate about being here.

How did you find out you were undocumented?

I kind of always knew. I don’t know if there’s a specific instance, but my mom was always very open about what was going on with me because it was just the two of us. She would be like, “So, this is the deal – we don’t have papers right now. Be very very careful. This is what we are dealing with.” This happened when I was in the fourth grade. So, in that respect, it wasn’t a shock to me. The way I reacted to it was by being really safe, by watching out for things, by not talking to cops, by doing well in school, by not getting in trouble, because if they found out I didn’t have papers they could deport me or something. It’s weird to grow up like that as a kid. It’s always there, for better or worse.

She’s okay. She’s living out in the San Fernando Valley, working, still under the table. She does all sorts of stuff right now, like bookkeeping, cooking food or catering, sometimes she works as a nanny for certain families. I think the hardest part for her is that she’s getting older now. She’s feeling very alone because I’m not necessarily there right now. She can’t go home to see her mom who is very sick and by herself in Romania. Both my mom and my grandma’s health is starting to require more attention. She is scared on occasion because nobody knows what’s going to happen with raids and ICE and all that stuff. But she’s doing better. She’s a very strong person. She’s the kind of person that would really be able to take care of herself under any circumstances, but it has taken a toll on her, too.

Tell me a little bit about your position, how long you have had it, and how you plan to bring your experiences into your work.

When I came to UCLA in 2011 as a student, I connected with IDEAS, the undocumented student organization at UCLA. After that, I went to the Immigrant Youth Empowerment Conference IDEAS puts on every year, and I thought to myself, “Wow, I didn’t know that I wasn’t the only one going through this,” which was a huge relief, but also a call to action. So, in future years, I went on to organize and negotiate funding for a lot of resources for undocumented students on campus and to lobby and advocate for our efforts.

My work in IDEAS was very similar in terms of the preparation you have to do for event planning, programing, special considerations, and how to outreach and advocate for this particular program. Those are all lessons that I learned when I was in school, so I feel fairly confident in the tools that I’m bringing. I think my goal for Dream Summer is to not only support the work that has been done, but to continue to push the program to be as valuable as possible to the applicants, to the people it’s meant to serve, and try to build upon it because it’s growing every year.

Is there anything in particular that you are looking forward to in working with the Dream Resource Center?

Just being in this space is awesome, and so is getting a chance to learn from the people that are typically here in the DRC. They’ve always been folks that I have looked up to, and I’ve done my best to follow in their footsteps. Something really specific that I am looking forward to this year is the closing retreat for this year’s Dream Summer Fellowship. It’s going to be in August, and at that point we are going to be three months into the general election. There will be a Supreme Court decision out on DAPA and DACA. A lot of this stuff is going to be moving forward, so I think the retreat will be a great and energetic place to discuss these developments, both positive and negative.

Interview and story by Vanessa Moreno