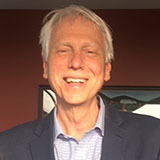 Larry Frank grew up in Maine and New York and graduated from St. Lawrence University in 1976 with a degree in Religious Studies. While enrolled at Princeton Theological Seminary he became involved in a cannery strike in Colorado that caused him to redirect his life and move to California to join the United Farm Workers (UFW). He worked on the staff of the UFW, the Amalgamated Clothing & Textiles Workers Union (ACTWU), and the Communication Workers of America (CWA), going on to lead committees and local ballot measures that helped reinvigorate progressive grassroots electoral politics in Los Angeles.

In 1990, Larry graduated from UCLA School of Law and developed a private sentencing practice in the criminal justice arena for ten years, continuing to work on electoral and criminal justice policy. He joined the staff of the UCLA Labor Center in 2000 where he worked as a project director and staff director.

In 2005, he was hired by Mayor Villaraigosa as the Deputy Mayor for Neighborhood and Community Services, hiring and overseeing 25 organizers and responsible for Public Works, the Community Development Department, Neighborhood Empowerment, and additional departments. He was also responsible for external Labor relations, workforce development, and special projects, and ended the Mayor’s two terms as Deputy Chief of Staff.

In 2013, Larry was hired as the President of Los Angeles Trade-Technical College (LATTC), supporting the development of Pathways to Academic, Career & Transfer Success (PACTS) throughout the college and focused on connecting the nine pathways developed to the “good jobs” in LA. Larry was recruited to the District Office in July 2019 to develop district-wide workforce and resource development before retiring in July 2020.

In October 2020, Larry was hired as the Capital Campaign Director, working half-time to help raise the now twenty million dollars required to renovate the newly purchased Downtown Labor Center and support the renaming of the building after civil rights and worker rights icon, Rev. James M. Lawson, Jr. He continues to work on a Labor & Employment History website with geographic markers along with faculty in the Labor Studies Department. He sits on the California Workforce Development Board and lives in Venice, CA with his spouse, Catherine, who together have two sons: Julian (age 28) and Elliot (age 23).