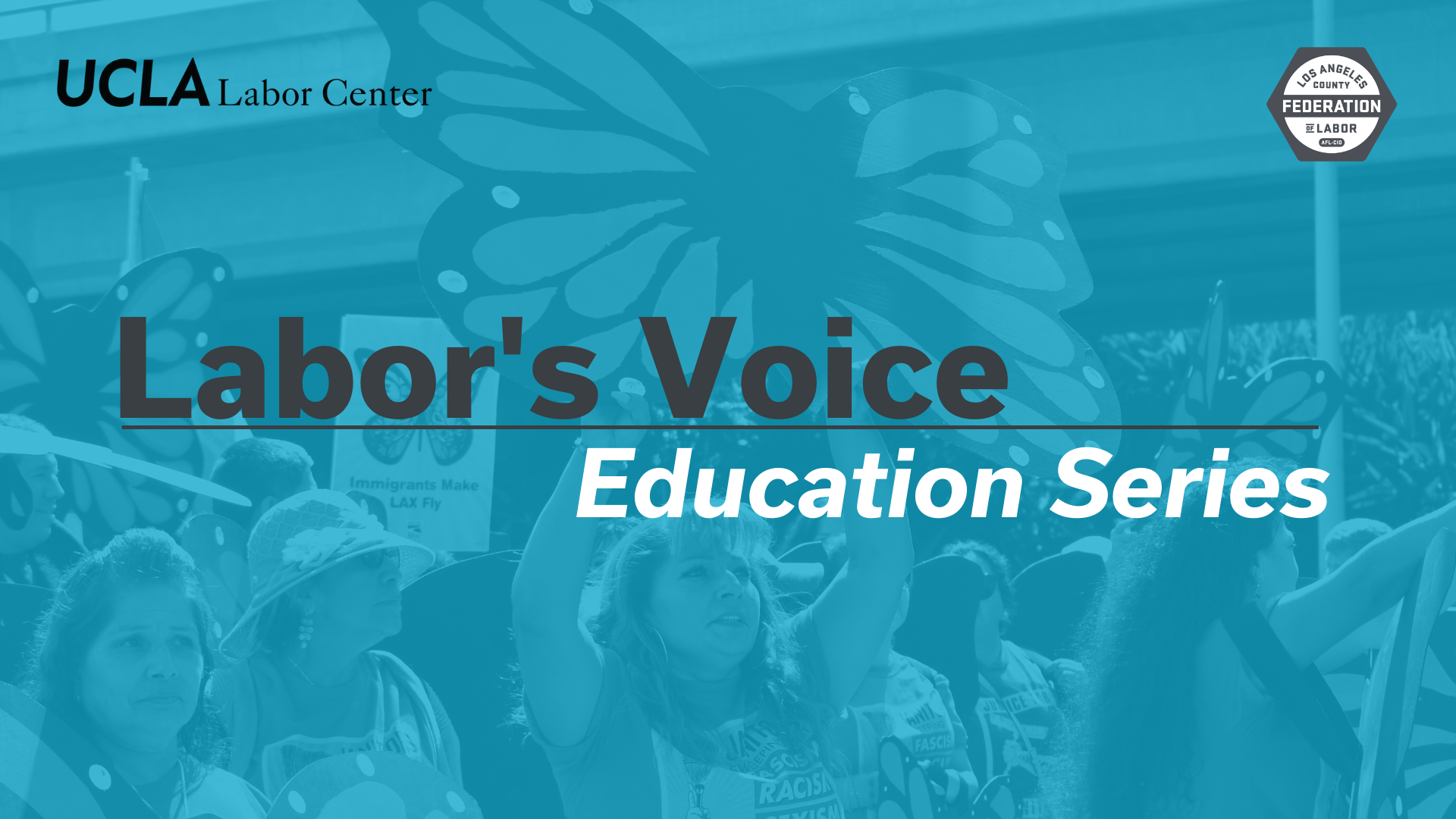 The UCLA Labor Center in partnership with the Los Angeles County Federation of Labor launched Labor’s Voice, a labor education series featuring the voices of workers, labor leaders, community leaders, and educators to promote inspiring ideas to advance policy change in the face of the COVID-19 crisis.

This Labor Education Workshop series will:

This series will be available via Facebook live and in our YouTube channel every third or fourth Thursday of the month.

This Labor’s Voice Program focuses on the immigrant youth movement and commemorates the 10th anniversary of Dream Summer, the first national fellowship for undocumented immigrant youth launched by the UCLA Labor Center and Dream Resource Center.

Moderated by Kent Wong, Director of the UCLA Labor Center

What is the cause of anti-Asian violence, and what can be done about it? What role can the labor movement play to stop anti-Asian hate, and how can we build multi-racial unity at a time when many communities of color are confronting white supremacy and institutional racism?

Congresswoman Judy Chu, a national leader in the fight against anti-Asian violence

Arlene Inouye, from the United Teachers of Los Angeles

May Day, International Workers Day, is once again celebrated in the U.S. because of the Immigrant Workers Movement. And nowhere in the country is the immigrant workers’ movement more vibrant than here in Los Angeles and California. Last month we celebrated the birthday of Cesar Chavez, one of the best-known labor leaders in U.S. history. Some of the most significant immigrant worker organizing campaigns in the country have emerged in Los Angeles, including the historic Justice for Janitors movement. Los Angeles has emerged as a focal point for the immigrant youth movement. And the dynamic worker center movement of Los Angles has helped to pace set the nation.

Teresa Romero is President of the UFW.

Rocio Saenz was a leader of the historic Justice for Janitors campaign of Los Angeles and now leads the immigration work for SEIU nationally.

Alexandra Suh is the Director of the Koreatown Immigrant Workers Alliance, building multi-racial working-class unity to fight for economic and racial justice.

Hugo Romero is a former immigrant youth activist who is now on the staff of the Los Angeles County Federation of Labor. The focus of our conversation will be on the current status of immigration reform in the country, which is back on the national agenda for the first time in over a decade.

Elise Bryant, President of the Coalition of Labor Union Women

This segment of Labor’s Voice celebrates Black History Month, with three labor leaders who are leading the fight for racial justice and worker justice

Doug Moore is the President of AFSCME/UDW who leads one of the largest unions in California of home care and child care workers.

Anton Farmby is a leader of SEIU-USWW, which secured one of the largest organizing victories of African American workers in decades with the Security Officer campaign.

The beginning of 2021 brought a historic victory in Georgia which flipped the U.S. Senate, and in quick succession, we witnessed insurrection, impeachment, and the Inauguration. On Monday, we celebrated the birth and legacy of civil rights leader Dr. Martin Luther King Jr. Join us for a conversation about the historic events we have witnessed in the first weeks of 2021.

The election of Biden/Harris was a huge victory for the U.S. labor movement. What should labor do now? What are the major policy initiatives that labor should propose to the new administration? How can labor build on the energy from the November Elections as we prepare for 2021?

The Los Angeles labor movement has played a critical role in building political power for workers in Los Angeles and California. This episode will discuss on how to get involved in the upcoming election and a conversation about Proposition 16.

This episode will discuss a new publication titled “Mike Garcia and the Justice for Janitors Movement,” which explores the extraordinary legacy of the late Mike Garcia. Mike Garcia was the longtime leader of SEIU United Service Workers West and a trailblazing advocate for immigrant workers across the nation.

This episode will be a discussion of how we can prioritize investment into schools through November’s Prop 15 (Schools and Communities First), as well as the safe, responsible reopening of schools post-COVID.

July 16 2020 at 7pm- Stopping the Spread: Workers on the Frontlines

This episode will cover the importance that worksites play on public safety and the critical role that workers play in stopping the spread of COVID-19 in our communities and keeping our economy from total shutdown.

The COVID-19 pandemic has further exposed increasingly troublesome patterns in the “Gig Economy”. From misclassifying workers to not providing PPE, corporations have continued to exploit workers when worker protections are needed most. This episode of Labor’s Voice will feature key research, worker voices, and concrete actions to support gig economy workers during this critical time.

This episode will feature the powerful voice of Rev. James Lawson, Jr., a Methodist minister and a key architect of the nonviolent tactics of the Civil Rights Movement. On the eve of his assassination, Martin Luther King called Lawson “the leading theorist and strategist of nonviolence in the world.” Join us as we discuss the police murder of George Floyd that has once again exposed the pattern of state-sanctioned violence directed at people of color, especially black men.

This week we will be discussing the impact the COVID-19 pandemic has had on the essential workers that are keeping us fed – farmworkers, drivers, and grocery workers – and the hurdles & risks they are facing along the way to getting food to our tables.

Performance by Irene Diaz, a singer-songwriter from Highland Park. Throughout her life, Irene has been focused on the search for identity and expression, and for a creative community and direction that best serves her mission. Irene has been featured on NPR’s Tiny Desk Concert series and Alt Latino. She performs Los Angeles and has performed in New York, Austin, Chicago, San Francisco, Portland, and Seattle. Beyond her music career, Irene is a frontline worker.

This week we will be covering the historic right to recall & retention legislation passed in the City of Los Angeles and how it will protect tens of thousands of workers across the city.

Cambalache which means “exchange” is Chicano-Son Jarocho music – a mix of indigenous baroque Spanish instruments, Afro Caribbean beats, Mexican and Arabic sounds that draws the audience in to participate in the spirit of the fandango. The fandango celebration is central to the son jarocho tradition of Veracruz, Mexico which fosters community participation and unity. In greater Los Angeles, this music has become a central resource and asset for movement building.