Round Up of Recent Media Hits 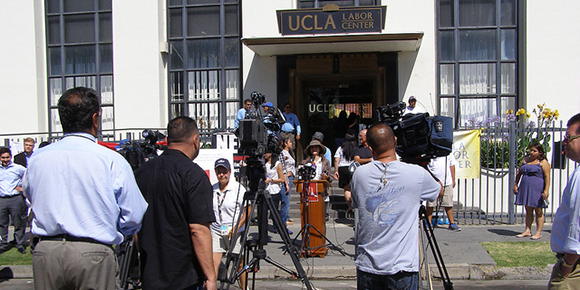 In case you missed it – Here are some highlights from news stories in the past month that have featured the UCLA Labor Center’s research and work.

The LA Times featured Noe Flores, a restaurant worker who didn’t receive pay for over two months while working at the popular Flying Pig restaurant. His story is just one of thousands of workers across the state who struggle to collect their back pay in wage theft cases.  For more, see the Los Angeles Coalition Against Wage Theft or the California Fair Paycheck Coalition. Read More.

Asian Journal reports on the Dream Resource Center’s new study Pol[ICE] in my Head. This latest segment in the Undocumented and Uninsured study investigates how the threat of policing and deportation takes a toll on the mental health of undocumented youth. Read More.

DO YOU SEE ME NOW?

These are just selects of the center’s recent coverage. See more of the UCLA Labor Center in the news.