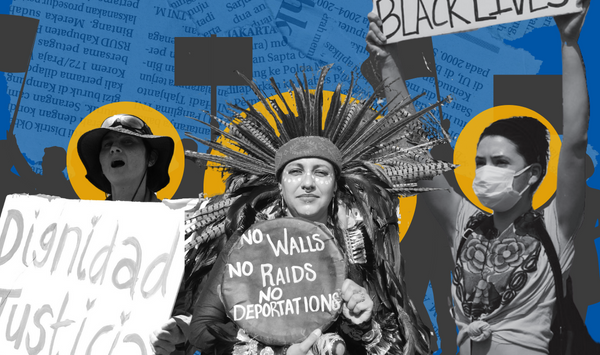 “The road to securing justice for immigrants and workers is a long and challenging one. Yet, the history of resistance movements is dense with stories of inspiring resilience, tenacity, and solidarity,” said Narro. “My hope for this book is to document and share these historic moments, so that we can better understand and utilize the power that the intersectional, multiracial immigrant rights movement has built.”

The book’s essays also articulate how immigration policy is related to larger questions of nation building, racialization, political participation, and social and economic inequality, alongside discussing the vibrant and increasingly intersectional organized resistance against repressive policies within the immigrant rights and labor movements.

“I am honored to co-author this anthology, as part of the Taking Freedom Series, which is aimed at sharing lessons of participatory research, learning, and organizing from the past and in the present,” said Calderón. “The readings in this anthology draw out lessons on the importance of building multiracial and intersectional solidarity in our immigrant rights, labor, and community-based movements: to fight alongside our communities against immigration and refugee policies that only focus on enforcement; to organize for policies that will immediately lead to permanent legalization with no expansion of temporary guest worker (bracero) programs and with labor law protections; and to cross borders in building international solidarity to turn around the neo-liberal systemic policies that have historically served only the interests of capital and multinational corporations.”

Organizing Lessons is available in digital format for free. To support classroom, workshop, and organizing discussions, a set of guiding questions accompanies each chapter.