On the Road to Montgomery and Selma with Rev. James Lawson Jr. 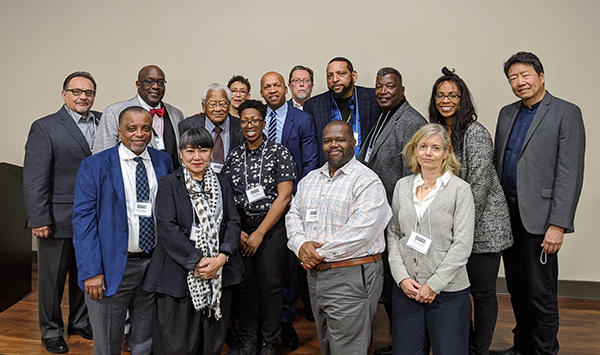 In March 2020, the UCLA Labor Center organized a labor delegation to travel with Rev. James Lawson Jr. to Montgomery and Selma, Alabama, the home of the civil rights movement. Montgomery was the site of the bus boycott in 1955 that catapulted Rosa Parks and Dr. Martin Luther King Jr. to international prominence. Selma was the site of Bloody Sunday, where, in 1965, Congressman John Lewis and other civil rights leaders were brutally attacked by state and local law enforcement officers on the Edmund Pettus Bridge; Lewis suffered a skull fracture and was almost killed.

This journey was transformational for many of the participants, including Ron Herrera, president of the 800,000-member Los Angeles County Federation of Labor. The visit began with a conversation between Rev. Lawson, one of the nation’s foremost practitioners of nonviolence and a close friend of Dr. Martin Luther King Jr., and Bryan Stevenson, founder of the Equal Justice Initiative and a leading death penalty attorney, who has worked tirelessly to oppose mass incarceration. Stevenson is the author of the national best seller Just Mercy and is featured in a recent film by the same name. His impact on Montgomery and the South also includes the establishment of the Legacy Museum and the Peace and Justice Memorial, the first in the country to honor the victims of racial lynching. Stevenson recruited the entire staff of the Equal Justice Initiative to attend the conversation with Rev. Lawson and praised him for his visionary role in guiding the movement for racial justice for the past sixty years.

The delegation took a private tour of the Freedom Rides Museum, housed in the former Greyhound bus station that was the scene of brutal attacks on young Freedom Riders, who were recruited and trained by Rev. Lawson to conduct desegregation and voter registration campaigns throughout the South. Museum director Dorothy Walker explained that the leaders Rev. Lawson recruited and developed during the Nashville sit-in movement served as the backbone of the Freedom Rides.

On March 7, Rev. Lawson spoke on a panel at the historic First Baptist Church of Montgomery, where civil rights icon Ralph Abernathy served as pastor. The Abernathy daughters spoke and sang and celebrated Rev. Lawson’s return to their church. Fellow nonviolence advocate Bernard Lafayette also spoke, and the panel was chaired by historian John Meacham from Vanderbilt, where Rev. Lawson studied theology in the 1960s and was expelled for his work in the civil rights movement. 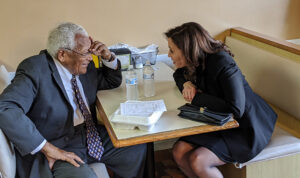 On March 8 in Selma, Rev. Lawson marched side by side with Congressman Lewis and dozens of congressional leaders to retrace the steps on the Edmund Pettus Bridge from that fateful day fifty-five years ago. Speaking on the bridge before a wall of news cameras and journalists, Lewis called Rev. Lawson “my friend, my mentor, and my brother” and told the crowd, “It has been awhile since Jim Lawson and I stood together on this bridge.”

Following the commemoration at the Edmund Pettus Bridge, appropriately named in honor of a Confederate general, the group returned to the historic Brown Chapel, a hub of civil rights activism. Before Rev. Lawson delivered the sermon, Speaker Nancy Pelosi spoke and celebrated him as “the master, the genius, and the teacher of the civil rights movement.” In his sermon, he addressed the members of Congress in the packed chapel: “Where there is no vision, a people perish. With liberty and justice for all, the people flourish.” Speaker Pelosi has since invited him to address the Congressional Democratic caucus.

The UCLA community is extremely fortunate to have had Rev. Lawson teach a course on nonviolence for the last eighteen years, and 240 students have enrolled in the wait-listed Spring Quarter 2020 course. The class will culminate in the Teach-In on Nonviolence and the Immigrant Youth Movement on May 27, 2 to 5 p.m., at UCLA’s Northwest Campus Auditorium. The teach-in will also celebrate the legacy of Tam Tran and Cinthya Felix, UCLA alumni and nationally recognized leaders of the immigrant youth movement who tragically passed away ten years ago this May.

Rev. Lawson will turn ninety-two this summer. He has been a powerful force for nonviolence and social change formore than sixty years, and he continues to serve as a moral and spiritual force for those who embrace peace and justice throughout the country. 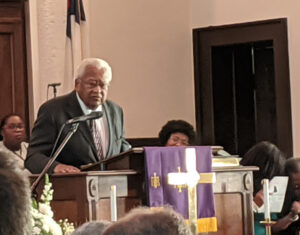