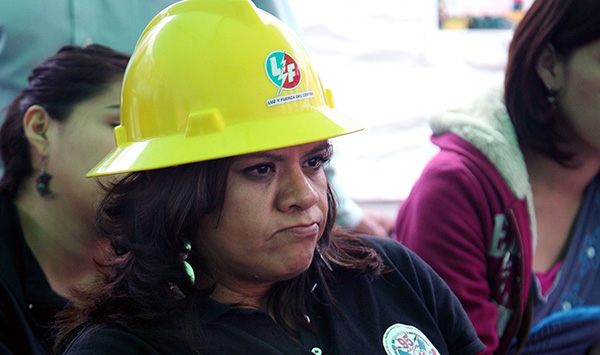 MEXICO CITY, MEXICO - 25SEPTEMBER10 - Workers and their families protest the actions of the Mexican government in firing 44,000 electrical workers and smashing their union, the Sindicato Mexicano de Electricistas (SME) in October, 2009. Since then many have been living in tents in front of the office of the Federal Electrical Commission, and participating in protests throughout the city. Elva Nora Cruz is the sister of a fired SME member, and sits with Triqui women protesting violence in Oaxaca under a tent in Mexico City's central square, the zocalo. Copyright David Bacon

This document seeks to analyze the role that the Conciliation and Arbitration (JCyA) play in the control system of the working class. For this purpose briefly examines the history of the relationship between the Mexican state and the working class, to shed light on the various forms of control over the class at different stages also considered within this time dimension some characteristics of the formation Power in Mexico