The State of Labor 20 Years after NAFTA 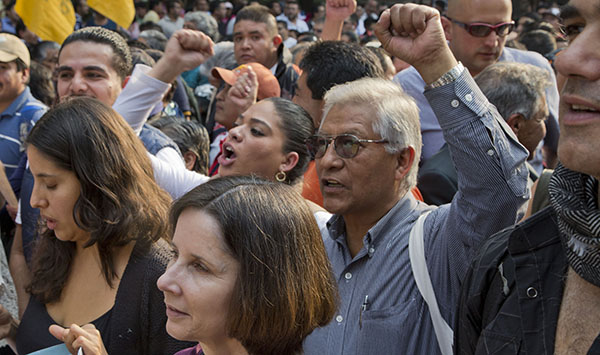 MEXICO CITY, MEXICO - 31JANUARY14 - Independent trade unions, farmer organizations, and the leftwing Party of the Democratic Revolution march in protest to Mexico City's main square, the Zocalo, on the 20th anniversary of the implementation of the North American Free Trade Agreement. The marchers protested the economic and political reforms passed over the last year by the Mexican government and the ruling Party of the Institutionalized Revolution, setting the stage for the privatizing the oil and electrical industry, implementing corporate education reform and social benefit policies, and changing the country's labor law. The march included members of U.S. and Canadian unions and organizations protesting NAFTA. Copyright David Bacon

Almost twenty years after the implementation of the North American Free Trade Agreement, a group of union leaders, academics, and independent journalists met in Los Angeles on December 2–3, 2013, to assess the development of international solidarity between workers in Mexico, the United States, and Canada during that period. One of the features of this three-country solidarity movement has been the creation of trinational networks, and the conference looked at their development in several sectors. These included the Trinational Solidarity Alliance, the Trinational Coalition to Defend Public Education, the Trinational Telecommunications Alliance, and the Trinational Energy Workers Network.

The four goals of this convening were to:

This report summarizes, breaks down, and synthesizes the perspectives of labor leaders from Mexico, the United States, and Canada on international solidarity and the future of labor.