Your Liberation Is Linked to Ours 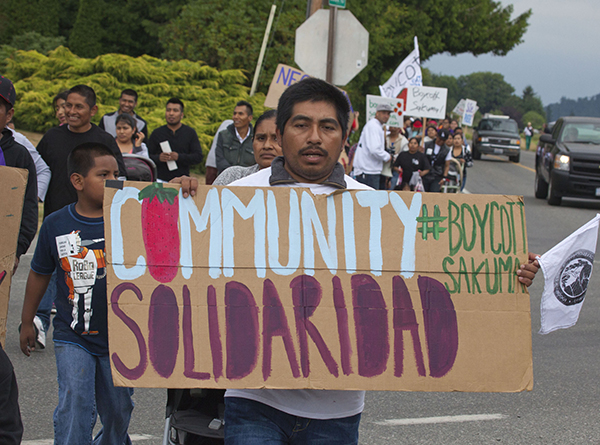 BURLINGTON, WA - 11JULY15 - Farm workers and their supporters march to the office of Sakuma Farms, a large berry grower where they went on strike in 2013. They are demanding that the company bargain a contract with their union, Familias Unidas por la Justicia. They have organized a boycott of Driscoll's, the giant berry distributor, accusing it of being responsible for the violation of their labor rights at Sakuma, since the company buys all the Sakuma blueberries the workers pick. The workers are indigenous migrants from Oaxaca, in southern Mexico. Copyright David Bacon

At our annual tri-national labor gathering, progressive unions and other labor organizations from the United States, Canada, and Mexico come together to discuss and collaborate on international solidarity campaigns. Held each December in Los Angeles and co-hosted with the UCLA Downtown Labor Center and its Institute for Transnational Social Change, these tri-national gatherings create an important space for the necessary task of building labor solidarity across industries and borders.

In this study, David Bacon—a former union organizer, longtime labor journalist, photographer, and author, most recently of The Right to Stay Home: How US Policy Drives Mexican Migration (2013)—picks up where last year’s tri-national labor gathering left off, reporting on current campaigns that have been discussed and in some cases planned at these meetings. Each of the five campaigns that he chooses—the PKC Maquiladora in Ciudad Acuña; the “El Super” Campaign in Los Angeles and Mexico City; the Cananea Mine in Sonora, Mexico; farmworker strikes in San Quintin, Baja California; and the Sakuma Farms/Driscoll growers in Washington State—is notable not just for the inspiring determination of those involved but for the critical role of international labor solidarity.

In each of these cases we witness how this type of international support can make a difference in the outcome of a local labor struggle. We are also able to see that, rather than constituting an additional burden for workers and organizers, international solidarity actions often create positive feedback loops that benefit workers and labor organizations on both sides of a border. By analyzing the challenges and successes of these different campaigns, this report ultimately draws out common lessons for current and future collaborations among unions, worker centers, and other labor organizations in the United States, Canada, and Mexico.

Publication made possible with support from Rosa Luxemburg Stiftung.