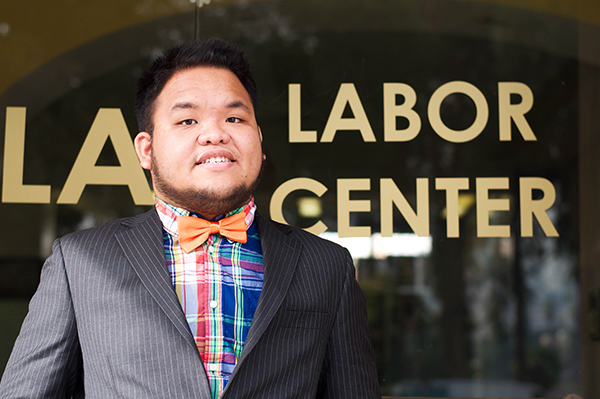 Welcome to Seth Ronquillo! Seth is the new communications coordinator at the Dream Resource Center, who graduated from UCLA last year with degrees in Film and Linguistics. Drawing from his experiences as an undocumented immigrant from the Philippines, he has been an active advocate for the undocumented Asian Pacific Islander community.

UCLA student Vanessa Moreno sat down with Seth to get to know him better.

Vanessa: How did you find out you were undocumented?

Seth: It wasn’t until my first day of senior year in high school that I saw that my visa expired. I did not know what that meant necessarily. I thought I was the only person in the entire universe without a social security number.

It was kind of like in the first X-Men movie, with what happened to Rogue. Rogue makes out with her boyfriend, and all of a sudden her boyfriend passes out and she was like ‘Oh my gosh, I’m a freak, whenever I touch people they kind of die,’ and you know, that’s the same experience that I had. I felt like Rogue. I felt like a mutant, like I was the only one of my kind in this planet. And then Rogue ends up meeting Logan, or Wolverine, and then they end up going to Professor X’s university.

I met my version of Logan through IDEAS co-chair, Mario De Leon, in 2010. He introduced me to my own X-Men, I guess. Mario invited me to an event called ‘AB 540 Student Welcome Day at UCLA.’ Just days before that event, I thought that I was the only undocumented immigrant at school, and then suddenly I went to panels throughout the day given by undocumented students already attending UCLA who were talking about their experiences as undocumented immigrants. It’s was really empowering to find out that I was not alone.

Vanessa: What would you say are specific struggles undocumented Asian/Pacific Islander students face?

Seth: Before DACA happened, and even today, there continues to be a very low turnout of applications for DACA in the API [Asian/Pacific Islander] community. Out of the 8% of APIs eligible for DACA, only 2% have received DACA so far. One reason is that in the API community there’s a huge barrier of language access. Unlike in the Latino community, where Spanish is dominant, API communities have a lot of languages that need to be accommodated.

Vanessa: So tell me a little bit about your new position. How do you plan to bring your experiences into your work?

Seth: Right now I’m working a lot on the Healthy California project with the Dream Resource Center, which is researching and engaging people about health needs in undocumented communities. We’re currently translating some of the resources and information that will be posted in the Undocumented and Uninsured website into API languages. Our goal is that API communities, who have highly monolingual, low-English proficiency rates, will be able to tap into these resources as well.

Vanessa: Before coming to the UCLA Labor Center, you also produced a documentary. Can you talk a little bit about this?

Seth: My documentary is called US. I produced it as part of the documentary concentration at the UCLA Film School and it pretty much just talks about my family’s undocumented immigrant narrative. For a long time I did not know how I became undocumented. I did not know what my family thought about undocumented immigrants. Originally, this was just going to be a school project but it ended up also becoming a healing process for me and my family as we learned about what each of us thought about our immigration status. I think the camera somehow allowed me to ask some questions that I never thought I would have been able to ask my mom and my brother about being undocumented.

Vanessa: That’s amazing. And finally, what are you looking forward to about working with the Dream Resource Center at the UCLA Labor Center?

Seth: The Dream Resource Center supported me throughout my journey as an undocumented student. I hope to be able to do the same for the next generation of undocumented youth and families, especially with the work we are doing to provide healthcare resources for immigrant communities.

Interview and story by Vanessa Moreno