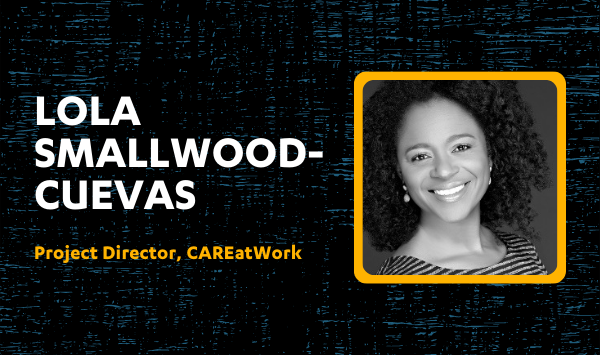 The Center for the Advancement of Racial Equity at Work (CAREatWork) launched in 2019 with a mission to engage Black workers and economic justice advocates, and facilitate innovative solutions that address the needs of Black working class people. CAREatWork utilizes a school-to-movement pathway of service, teaching, capacity building, and research to illuminate conditions of Black work in Southern California under global racial capitalism and model approaches for change.

We spoke with our Project Director Lola Smallwood-Cuevas, who is leading CAREatWork, to learn more about this timely endeavor. Our conversation was edited for length and clarity.

What is the Center for the Advancement of Racial Equity at Work?

CAREatWork is a new effort that combines collaborative research, education, and mentorship to bridge multiple disciplines and target community institutions to form a research ecology around the challenges of Black workers under racial capitalism.

CAREatWork waters the roots that weave between academic institutions committed to civic engagement and community justice advocates who protect and defend Black workers, and springboards young, emerging student leaders into growing the field of Black organizing and the Black Worker Movement. This initiative centers Black workers and their communities in creating approaches and advancing innovative solutions that ensure equity around Black life cascades into meaningful Black working conditions that sustain vibrant communities. 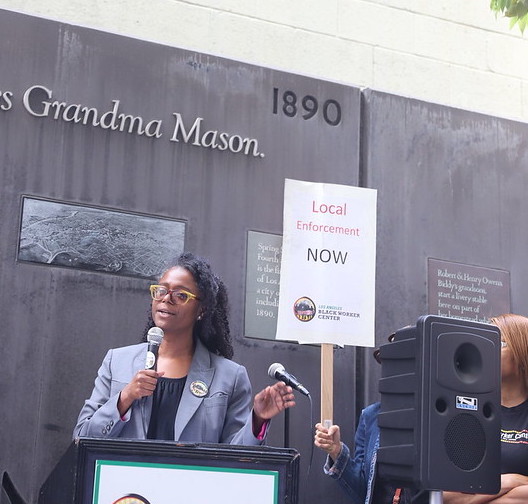 We see CAREatWork serving as a regional nexus between UCLA, Black organizers, and economic justice advocates in California. Los Angeles and the Southern California region provide a unique context to establish institutions for Black worker organizing. Sixty-four percent of all Black Californians live in Southern California. Before the pandemic, job loss and other economic factors displaced Black workers, forcing migration to inland suburban areas that were never designed for Black communities and have very little social and public infrastructure to support their needs. These needs were exacerbated during the pandemic, further destabilizing this vulnerable workforce as Black women experienced the highest job loss of any other group in the state and Black workers overall hold a significant share of low-wage essential jobs exposing it to disproportionate risk. At the same time, this group experienced a higher rate of workplace retaliation when reporting health and safety concerns.

The systemic racism and disenfranchisement of Black people, including their overrepresentation in unemployment and low-wage work, contributes significantly to their overrepresentation in incarcerated and homeless populations, and disproportionate struggles with food deserts and health and economic disparities. In order for Los Angeles and California to address these exploding social problems in the region, the economic health of the Black community must be addressed by those most impacted.

No single reform—especially those made without Black workers themselves who are most impacted—will undo the centuries of racialized economic violence and oppression; and yet, by working toward justice through CAREatWork, UCLA, students, worker centers, unions, community members and faculty have the opportunity to collectively work together, establish a model for creating policies that shift power dynamics, and give agency back to Black working-class communities.

What are the main goals of CAREatWork?

We want to build cross campus programming that positions UCLA, in partnership with community justice advocates, to address the absence of Black students on campuses, convene civic engagement around the economy, and ensure Black folx have access to and are represented in quality education and work.

A second goal is to expose a school-to-movement pathway for students who want to engage in long term worker rights organizing and research to give back to their own neighborhoods. And lastly, we aim to strategically collaborate with a variety of departments and other entities of UCLA interested in building relevant and actionable research, education, and service that promotes civic engagement through the lens of Black work.

What led you to establish the CAREatWork Initiative? 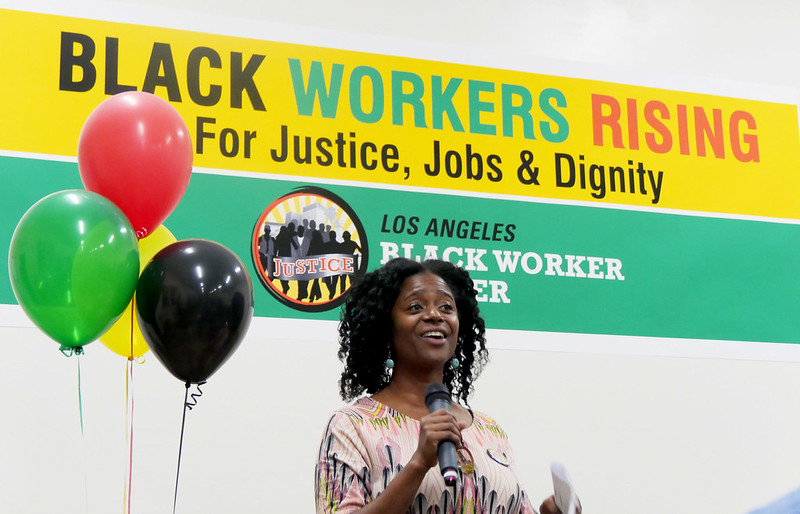 CAREatWork grew out of more than a decade of partnership with the Los Angeles Black Worker Center and UCLA Labor Center. Black worker centers are re-stabilizing community-rooted institutions that are dedicated to defense, protection, and organizing around Black worker rights.

CAREatWork grows out of my story and my mother who truly inspired my place in this work. As a 17-year-old young woman who had a child, she had to make a lot of sacrifices. She was the only person to care and provide for her family. She had to work two jobs and continued her education, hustling 15-18 hours a day most of the time. She was forced to make a choice between livelihood and fully expressed parenthood for many years. Once she was able to land one good job, everything about our lives changed for the better.

I think that for Black families, we should never have to make those kinds of choices, but millions of unemployed and working parents have to do this every day. Workers deserve to have one job that takes care of our families. The social fabric of our communities is pulling apart because so many Black workers and the families who rely on them are left behind in the California economy.

Why is CAREatWork an important initiative, particularly during the COVID-19 pandemic and growing movement for Black Lives?

When we look back to the history of organizing in times of crisis and see Black workers rising for justice and dignity, we’re reminded of the power we have to create change. We know how powerful Black workers’ experiences have been to organizing for change in our communities and our society. When a crisis hits, it’s often Black communities that bear the brunt of the impact. We know this from the 1992 Uprising, Katrina, and the 2008 recession that built recovery on the backs of Black workers in the public sector. We also know we’ve made it through social and economic crises, generation after generation, because of our courage, resistance, and resilience in the face of unjust policies and practices that seek to undermine our health and safety, and erase Black workers. 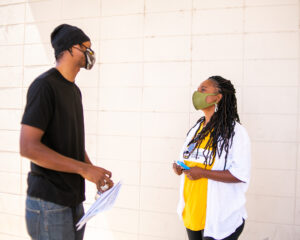 During the COVID-19 pandemic, Black workers are putting their health and safety at risk to lift up dangerous working conditions and protect their co-workers, neighbors, and other consumers as we all scramble to stock up for weeks, maybe months, of uncertainty and isolation. Right now, workers in communities across California, the nation and the globe, are generously giving what they can and showing up where they can to care for and protect each other. Many working class Black folx—individuals whose lives are more dictated by systems than humanity—are constantly navigating survival amid complex, compounded traumatic stress disorder, and are simultaneously locked out of systems and disempowered by debilitating policies that prioritize profit over reparations. Crises like the COVID-19 pandemic only exacerbate the inequities that are deeply entrenched within our criminal legal, education, social service, and healthcare systems.

The movement for Black Lives raises the demand that intentional interventions are necessary to address such detrimental Black disparities. This is particularly challenging in an anti-affirmative action state like California that has essentially outlawed intentional inclusionary remedies for Black folk.

CAREatWork is important because we need organizations and institutions to ensure an equitable recovery under these conditions and help tend to the garden of justice to keep it growing, building, and manifesting the change that we want to see. This is a glorious moment to be alive because we see the vision of what’s possible. These past five years have presented a stark choice and empowered people are taking a stand for a more just world. Young Black people are at the forefront of this. We see the radical possibility in the demand for redefining safety and the call to abolish outrageous policing budgets and what it means to demilitarize our communities. It does not make sense for the City of Los Angeles to spend half of its budget on policing, which disproportionately kills Black people. What if we invested those dollars in expanding access to quality jobs to rebuild our communities through a solidarity economy that stabilized families? That would make our communities so much safer. Right now, Black racial, social, and economic justice advocates and organizers see a vision to rebuild systems at the intersection of race and capital.

How do you see CAREatWork 5 years from now?

As a critical partner in winning justice for all, Black people are the foundation of freedom, throughout the U.S. and in Los Angeles, despite being violently denied freedom. Despite being violently denied justice, time and time again, Black resistance and innovation, protest and leadership, resilience and power has paved a way for justice for us all. That means in 2026, we are actively engaging with parents to institutionalize community-based worker centers, particularly in suburban areas with growing Black populations; investing in regional Black community, labor, and university partnerships that promote labor research and education; anchoring students in experiential learning and application of organizing theories through economic justice fellowships and mentorship; establishing spaces for policy learning and campaign development that centers a  collaborative approach for designing; and moving a Black economic development agenda led by those most impacted to create policies and programs that intentionally expand access to quality careers for underrepresented populations through equity-hiring mandates and equity for the region.

What is your hope for CAREatWork? 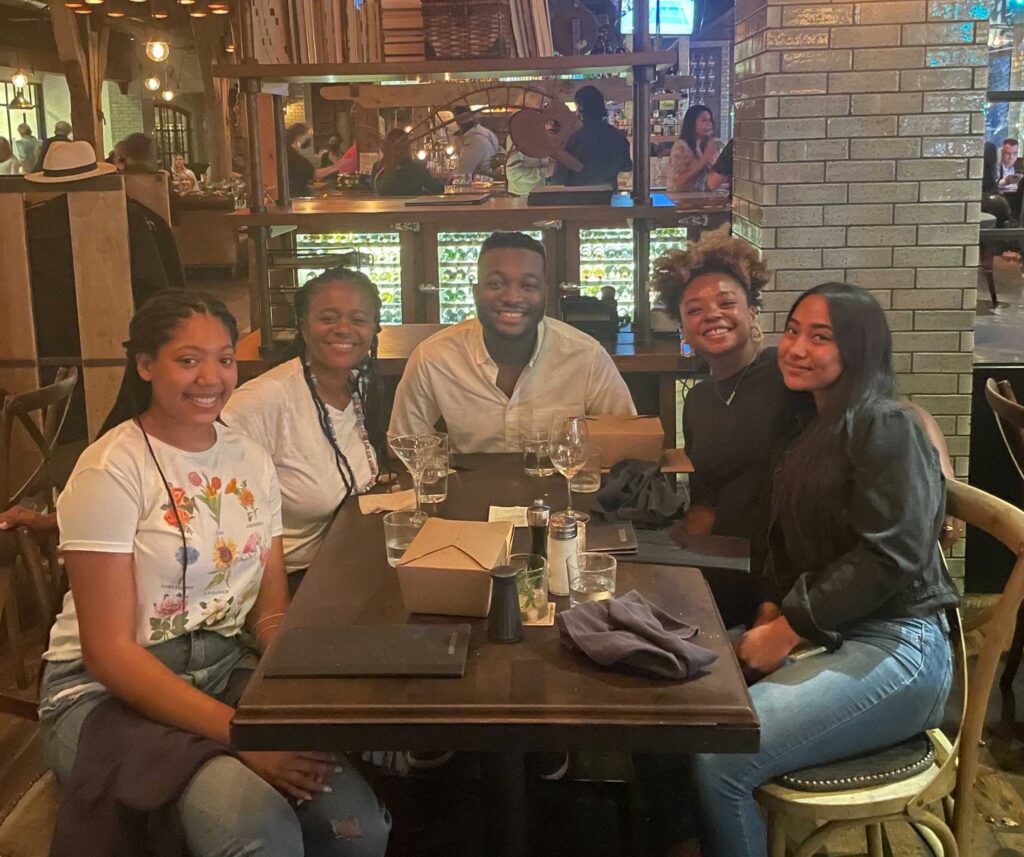 My hope is that CAREatWork is successful and will no longer need to exist because of its ability to intentionally focus on a population with historic economic and racial disparities, and make the right equitable investments to reverse disproportionate economic hardship on SoCal Black families by working with a vast network of Black Worker Centers in Los Angeles, San Diego, the Inland Empire and across the state-central.

When Black workers do well, our communities do well. This is particularly important in the Los Angeles region where so many Black and Brown shared-fate communities exist. A brighter future for Black workers means a brighter future for the region overall. Our hope is to help build a sustainable field of Black worker centers and economic justice leaders who will use the power of their voice, networks, strategy and action to reverse the Black jobs crisis in Southern California where 1.5 million Black families live and work. This means discrimination-free worksites where workers are treated with dignity, respect and family sustaining wages that allow for generational wealth building such as home ownership and higher-education.