Congratulations to LeDaya Epps, who was first Lady Michelle Obama’s guest at the President’s State of the Union Address! Her story shows the power of strong labor/community partnerships to take on the Black jobs crisis.

LeDaya Epps was raised in South Central Los Angeles. She grew up in the foster care system until she was a teen, and although she graduated high school, she found it difficult to find a job. She bounced around between jobs for a number of years as a medical assistant, but couldn’t find the stable work and pay that she needed to provide for her three children.

A current member of the Los Angeles Black Worker Center referred LeDaya to the center, and she became a member. As part of its Ready to Work program, the center connected her to PVJOBS and she was one of only two women to pass the rigorous Laborers International Union (LIUNA) bootcamp. She now works as a first-year laborer apprentice and is working to build the Crenshaw light rail line. 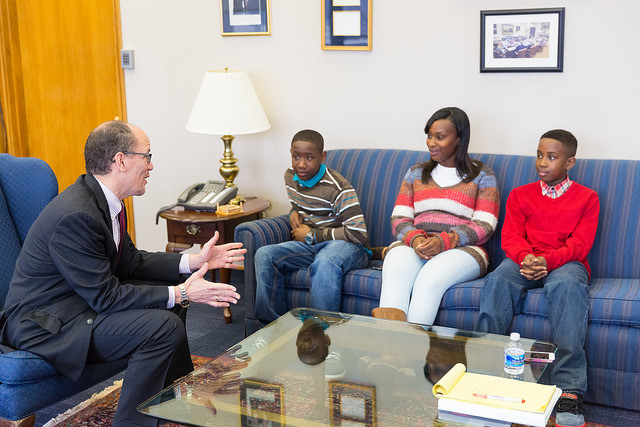 LaDaya and her sons with the Secretary of Labor Thomas Perez in D.C. before the President’s State of the Union Address, 2015

“We know that there are deep institutional barriers to employment–background checks, credit checks, discrimination on the job, and more.” says Lola Smallwood Cuevas, director of the LABWC. “Black workers face nearly double the unemployment rate of the general population nationwide. Black workers and women are severely underrepresented in the construction industry. LeDaya’s story is an incredible model for how to dismantle these barriers when community groups work together with unions, employers, and local agencies. We need to decide that black workers lives matter and replicate this model across the country.”