Tune in to our new Re:Work podcast miniseries at reworkradio.org! 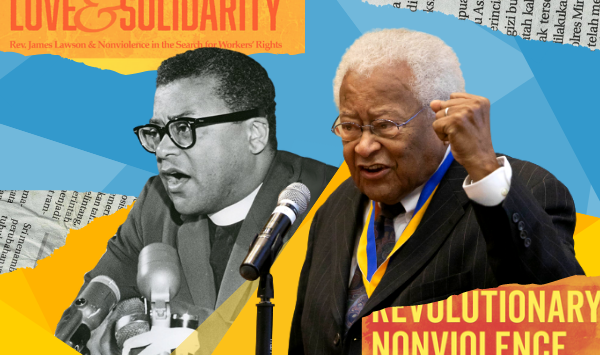 In 1935, a young boy named Jimmy walked down a street in Massillon, Ohio to run an errand for his mother. Along the way, he encountered another boy, who hurled at him a racist epithet. Jimmy struck his accoster before going home and telling his mother of the encounter.

“My mother, without turning to me at all, continued to work at the stove where she was obviously preparing our evening meal. She said quietly to me, ‘Jimmy, what good did that do?’”

The episodes survey Lawson’s legacy of advocating for justice in the face of racial segregation and labor exploitation. Included are retellings of Lawson’s childhood, his incarceration for being a conscientious objector to U.S. military enlistment, his travels to India as a student of Gandhi’s nonviolence teachings, and his role alongside Martin Luther King Jr. as a strategist in the civil rights movement.

Listen to the first and second episodes at reworkradio.org or your favorite podcast platform: