Solidarity from the Ground Up 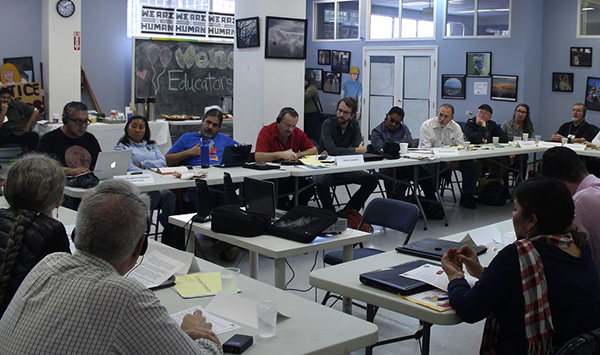 For the third straight year, the Rosa Luxemburg Stiftung—New York Office will co-host this Trinational Exchange with the UCLA Downtown Labor Center and the Institute for Transnational Social Change.

Last year’s gathering focused on building labor solidarity among trade unions and worker centers across the United States, Mexico, and Canada. View photos from that event. Several initiatives either emerged from or were propelled forward by this meeting, chronicled by David Bacon.

Several of these campaigns are ongoing, and this year’s discussion will largely focus on how to support and build on them. Particular points of focus will include: supporting farmworkers in fights against transnational corporations in Washington State and Baja, Mexico; and struggling alongside low-wage workers in Los Angeles, maquiladora workers along the U.S.-Mexico border, and miners in northern Mexico.

As part of our ongoing focus on mixing methodologies and engaging real-time labor struggles, the gathering will include: a community dinner and discussion with the Koreatown Immigrant Workers Alliance; and a trip to support an emerging low-wage worker collective action.

More generally, Global Solidarity from the Ground Up will carry forward the founding goals of the Trinational Exchange series:

This gathering will commence on Thursday evening, December 3, and continue all day on Friday and Saturday. It will be held largely at the UCLA Downtown Labor Center. It is not open to the public, strictly speaking, but you may inquire with RLS–NYC Project Manager Ethan Earle (earle@rosalux-nyc.org) about attending some portion of the programming.