On Friday, June 24th, the UCLA Labor Center and the Asian Pacific American Labor Alliance (APALA) co-hosted a forum at the national AFL-CIO headquarters on the role of workers and their unions to combat anti-Asian hate. The forum, Asian American and Pacific Islander Workers at the Forefront of Racial Justice, coincided with the 30th anniversary of APALA, the first and only national labor organization of AAPI workers and their allies — and was possible thanks to the generous support from the W.K. Kellogg Foundation, California Department of Social Services, and the Cathay Bank Foundation.

The organization Stop AAPI Hate reported there were more than 3,800 anti-Asian incidents within the first year of the COVID-19 pandemic. Asian American workers have also been directly impacted by the escalation in anti-Asian violence.

“A stronger labor movement requires all of us to fight against anti-Asian racism as deeply and swiftly as we fight for workers’ rights,” said Fred Redmond, AFL-CIO Secretary-Treasurer. “Solidarity means we cannot continue to ignore anti-Asian discrimination within our organizations and in society at-large or expect Asian American union members to tackle this problem by themselves. Anti-Asian violence is rooted in structural racism and economic inequality; that means there is an important role for the labor movement to play in resolving these issues.” 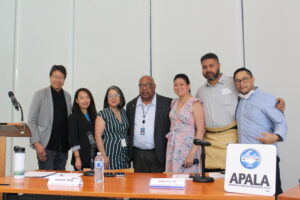 “The past two years have marked a rise in violence against Asian American and Pacific Islander communities. However, anti-Asian violence is not a new problem; it is part of a long history of anti-Asian sentiment in America,” said Kent Wong, UCLA Labor Center Director. “This forum served as a call to action for the U.S. labor movement to commit itself to racial and social justice in order to effectively build a powerful, multiracial working-class movement.”

APALA previously organized a virtual town hall, collated resource guides and toolkits, and led political education efforts to engage the broader labor movement in the fight against anti-Asian racism. The national forum built upon this preceding work and concluded with a demand for unions to commit resources in support of workers organizing against anti-Asian violence and to take action to end anti-Asian racism within their institutions.

“For the past 30 years, APALA members have organized with other union members and community leaders to address the racial and economic injustices workers of color experience on the job, while pushing the labor movement to be truly inclusive of all workers,” said Brady Calma, APALA National President. “Though we still have further to go, we’ve come very far to be able to have an open and productive discussion about what we can do in the present to resolve the issues that arise from our movement’s history of anti-Asian discrimination.” 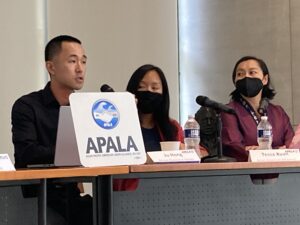 The forum highlighted testimonies from AAPI workers and community members, and connected their personal experiences with anti-Asian violence to broader issues of systemic racism and economic inequality. Attendees also strategized how the labor movement can advance an intersectional racial justice agenda amid the 2022 elections and ongoing fights for immigrant, worker, and civil rights.

“The conversations throughout today’s forum centered around a core truth: the labor movement cannot win on workers’ rights and progressive causes without investing in racial equity work inclusive of AAPI workers and developing AAPI leadership,” said Jessica Tang, Boston Teachers Union President. “Our stories must be told because continued indifference toward the issue of anti-Asian racism renders the struggles of Asian American workers invisible. One actionable step unions can take coming out of this forum is to work with APALA to lift up AAPI labor history and ethnic studies in education.”

In advance of the forum, the UCLA Labor Center shared stories from AAPI members of unions, worker centers, and community groups, regarding their experiences with anti-Asian hate and how they are organizing to keep their coworkers and community members safe. Read here.