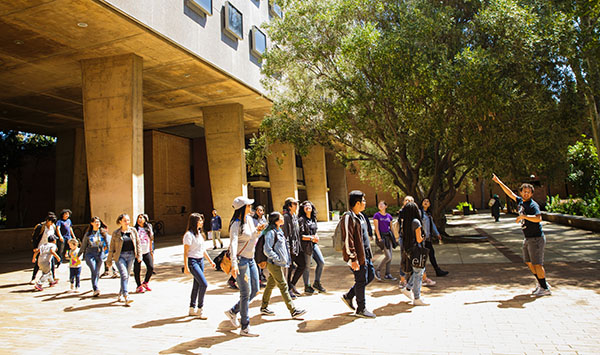 Participants in the Parent Worker Project were shown around campus so they could envision UCLA in their children’s futures. Photo by Wil Prada.

Los Angeles workers who sew clothes in garment factories, clean offices and homes, and provide child and home care often work 60 to 80 hours a week. Despite and because of their exhausting work schedules, extensive commutes and the stress of trying to make ends meet, parents in these industries prioritize their children’s learning so the next generation has the opportunity to go to college and ultimately get better-paying careers.

Their commitment was evident on April 21 when a group of about 100 garment, janitorial and domestic worker parents and their children, ranging from toddlers to teenagers, boarded buses in downtown to come to UCLA. Upon arrival in Westwood they were greeted by their hosts, UCLA students taking a class on economic and educational disparities.

“Some of these parents worked until 3 a.m., but still got on the bus to UCLA at 8:30 this morning,” said Janna Shadduck-Hernández, leader of the Parent Worker Project at the UCLA Labor Center and instructor of the course, “Working Families and Education Inequalities in Urban Schools.” “They are determined to provide their kids with engaging educational activities, regardless of their long work hours or public school cutbacks.”

Many of Shadduck-Hernández’s students — who also come from working-class backgrounds — felt connected to the course and their guests. They hoped the day they planned would in turn lead workers and their families to feel connected to UCLA.

“I come from a working-class family and went to a low-income, underserved Los Angeles Unified School District school. So I really relate,” said Valerie Vargas, a UCLA junior. “Education is a powerful tool for people of color, migrants and workers. I hope the families feel inspired that they do have a place in institutions like this, and see people at UCLA want to carve out a space for them.”

The visit was a part of the UCLA Labor Center’s Parent Worker Project. By training parents to navigate the school system and access community resources, the project helps parents engage critically with their children’s early education. These parents go on to educate other parents about accessing and reforming education.

The project, which receives support from the W.K. Kellogg Foundation, first enlisted janitors affiliated with the Building Skills Partnership and SEIU-United Service Workers West in 2015. The project is now focusing on garment and domestic workers, in partnership with the Garment Worker Center and Instituto de Educación Popular del Sur de California.

In January, the parents in the project developed the idea of a field trip to UCLA emphasizing opportunities for their children to engage with the campus.

“I want my kids to interact with this environment very early on, so they know that there are spaces they can enjoy someday, and have a vision,” said Noemi Castro, the mother of two young children.

The day’s itinerary included a walking tour led by student representatives from MEChA de UCLAthat emphasized the roles of people of color on campus. The guide presented the history of Black Panthers and Chicana and Chicano studies at UCLA to mothers pushing strollers and children waving balloons.

The tour included a stop at Dickson Plaza. Explaining that Mexican and immigrant laborers had laid the bricks for the original campus buildings, the guide noted that he would like to see more people of color on campus. One youth asked about Black and Native American student numbers on campus.

“We need to keep fighting in all areas. And you have to teach this to your kids so they can keep learning and fighting,” Castro said after the tour. “Just like the tour guide said, there is a lot of injustice in our communities. We have to move forward in the fight.”

“What I want most is for my son to be prepared, get a career, and be a Latinx role model,” said Maria Mena, who has a 17-year-old son. “I want the people to see that we are Latinx and that we can move forward.”

The day ended with a bilingual discussion of pelota mixteca (Mixtec-style ball) followed by a live demonstration. Lupe Sanchez, a UCLA junior who helped organize the trip, explained why her classmates felt it was important to include a cultural component in Family Day: “People who don’t see their culture represented in mainstream media and places may feel like their culture is inferior. So to see something like this at UCLA is radical.”

As families, UCLA students, and staff watched players donning colorful, decorated gloves hit balls around Wilson Plaza, UCLA Labor Center project director Gaspar Rivera-Salgado summed up the day: “My hope is that by organizing this day with working immigrant parents, they get to know they have a life here on campus and that they are welcome. After all, UCLA is a public university — it’s their university.”