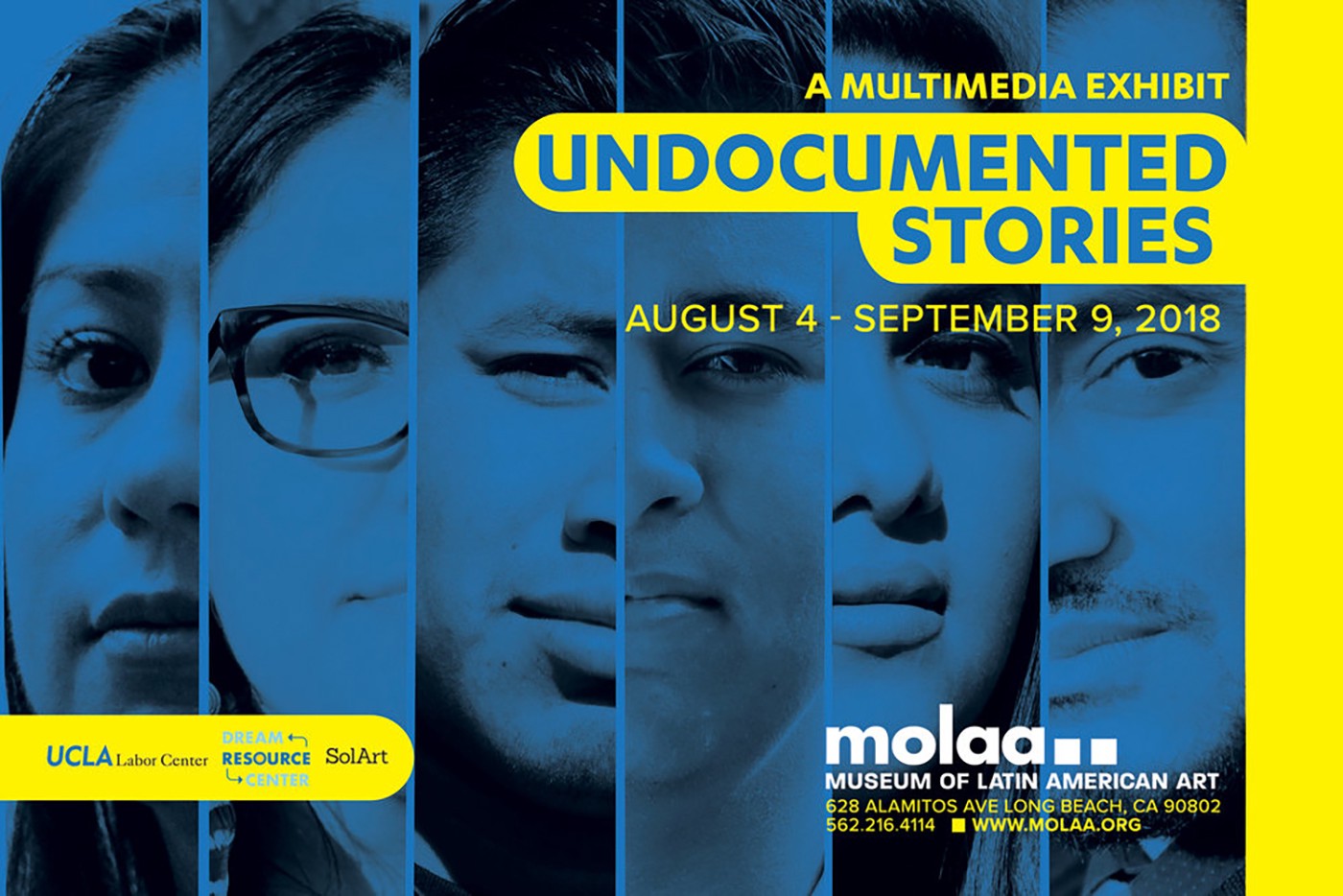 When people are allowed to tell their own stories, they can provide insight into and connection to groups of people we may not ordinarily interact with. But when other people tell those stories, they can be used to paint a negative and unfair picture. No one has done this more, and with more disregard for facts and hatred toward the immigrant community, than Donald Trump. Not a week goes by where he does not say something inflammatory about immigrants, and his supporters echo those stories. Thankfully, working for the UCLA Labor Center’s Dream Resource Center (DRC) has provided me with opportunities to hear positive stories and experiences from my coworkers and community partners. Some of these stories are featured in the DRC’s Undocumented Stories exhibit.

The Museum of Latin American Art (MOLAA) in Long Beach will be hosting Undocumented Stories, a multimedia exhibit that showcases the personal stories and experiences of immigrant youth, from August 4 to September 9. Undocumented Stories was curated by UCLA students, staff from the UCLA Labor Center and the DRC, and SolArt Media & Design. It includes personal stories, video, and photographs of unaccompanied minors and undocumented youth who built a movement to change US policies on access to higher education, immigration, and deportation.

The exhibit aims to humanize the undocumented immigrant experience, empower the immigrant community, and incite critical conversations about the future of US immigration law and policy. The exhibit has traveled to various locations around the country, including Washington, DC, and Boston through a partnership with the National Education Association.

The exhibit features the stories of people like Set Rongkilyo, who does communications for the ICE Out of LA coalition. Set and his family’s migrated to the United States with the hope of naturalizing their status through an employer. Unfortunately, Set’s family could not fulfill the extensive requirements, became undocumented, and were eventually separated. Set’s father had to return to the Philippines to care for his sick mother and will have great difficulty returning to the United States because of his undocumented status. Then there’s Diego Sepulveda, currently the director of the DRC. I met Diego in 2009 when I was an undergraduate student at UCLA, and I remember how fearless and persistent he was as an undocumented student. The exhibit chronicles his experience as a transfer student attending UCLA and his advocacy efforts in LGBTQ and environmental issues.

My experience working at the DRC and with MOLAA has strengthened my commitment to the movement to ensure that all immigrants are treated with respect and humanity. By uplifting the stories and leadership of immigrants in these unfortunate times, the Undocumented Stories exhibit functions as a necessary and vital counter to the falsehoods coming out of the White House.

George Chacon is the Immigrant Justice Project Manager at the Dream Resource Center, where he guides immigrant leaders in developing rapid response networks for immigrant communities as they face increased threats of detention and deportation. He graduated from UCLA in 2010 with a BA in international development studies and a minor in education studies. He is an LA native and has worked on issues such as workforce development, health and wellness, and college readiness.

Originally published on August 23, 2018 by the LA Social Science e-forum.