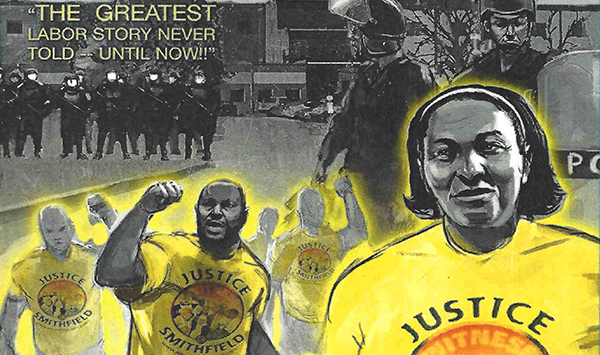 The UCLA Labor Center in collaboration with the UCLA Labor and Workplace Studies minor and the UCLA Institute for Research on Labor and Employment invites you to the film screening of Union Time: Fighting for Workers’ Rights.This new documentary film that tells the story of one of the greatest union victories of the 21st century—the fight to organize Smithfield Foods’ pork processing plant in Tar Heel, North Carolina. Narrated by actor and activist Danny Glover, the film portrays how meatpacking workers fought dangerous working conditions, intimidation, and abuse until they achieved victory in the Justice@Smithfield unionization campaign. Now the 5,000 workers at the Tar Heel plant have fair working conditions, better pay, and above all, respect. The film gives voice to the meatpacking workers who refused to give up through a 16-year-long struggle. Union Time weaves together labor rights and civil rights to show how unions still are, despite efforts to dismantle them, a potent force for economic justice.

What is the story of the Justice@Smithfield campaign?

Since the Smithfield Foods pork processing plant opened Tar Heel, North Carolina in 1993, meatpacking workers endured dangerous working conditions, intimidation, and low pay.  From 1993 to 2008, workers fought for the right to organize a union. Smithfield countered their efforts with increased intimidation of union supporters, interference with two union elections, violence against workers, and lawsuits. Finally, during the third union election in 2008, a majority of plant employees voted to bring in the United Food and Commercial Workers’ Union (UFCW). Since that time, UFCW Local 1208 in Tar Heel, North Carolina has successfully negotiated higher pay rates and safer working conditions. Most of all, the Tar Heel employees have the satisfaction of being treated with respect.

Who produced the film?

Matthew Barr produced and directed the documentary, filming from 2007 to 2015. Barr is Professor of Media Studies at UNC-Greensboro. His film work focuses on the impact of globalization and social change on working people and working communities.

Free and open to the public.

Q&A with the film’s director Matthew Barr after the screening!

The Unheard Voices Project: Documentaries that Make a Difference