What is Wage Theft? 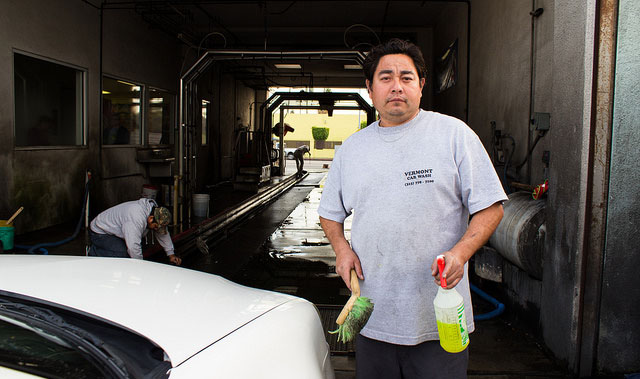 The carwash industry is notorious for wage theft. Workers at Vermont carwash (pictured above) are now unionized thanks to the CLEAN Carwash Campaign.

Wage theft is the illegal practice of not paying workers for all of their work including; violating minimum wage laws, not paying overtime, forcing workers to work off the clock, and much more.  It is a major problem statewide. In Los Angeles alone, low-wage workers lose $26.2 million in wage theft violations every week–making it the wage theft capital of the country. 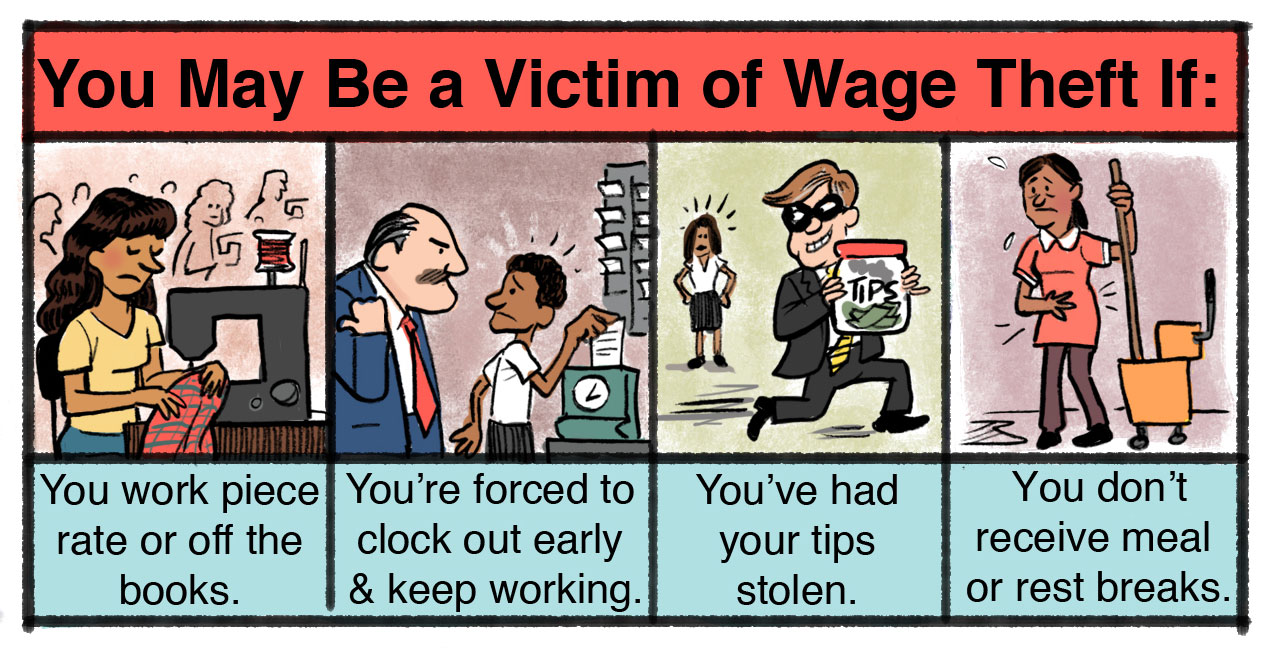 Why can’t people just report this and collect?

California has many strong labor laws on the books, but wage theft persists because of lack of enforcement. When workers attempt to report wage theft violations, the process can take years, and businesses often shut down or change names during this time.

The UCLA Labor Center reviewed wage claim data from 2008-2011 and found the majority of companies ruled against by the labor commission and courts never paid back any wages. 83 percent of workers who hold a court-ordered claim to receive their unpaid wages never see a dime.

In the current system it is easy for unscrupulous employers to avoid the consequences of their actions. In fact, employers often close up shop or open up their business under another name to avoid paying their workers. 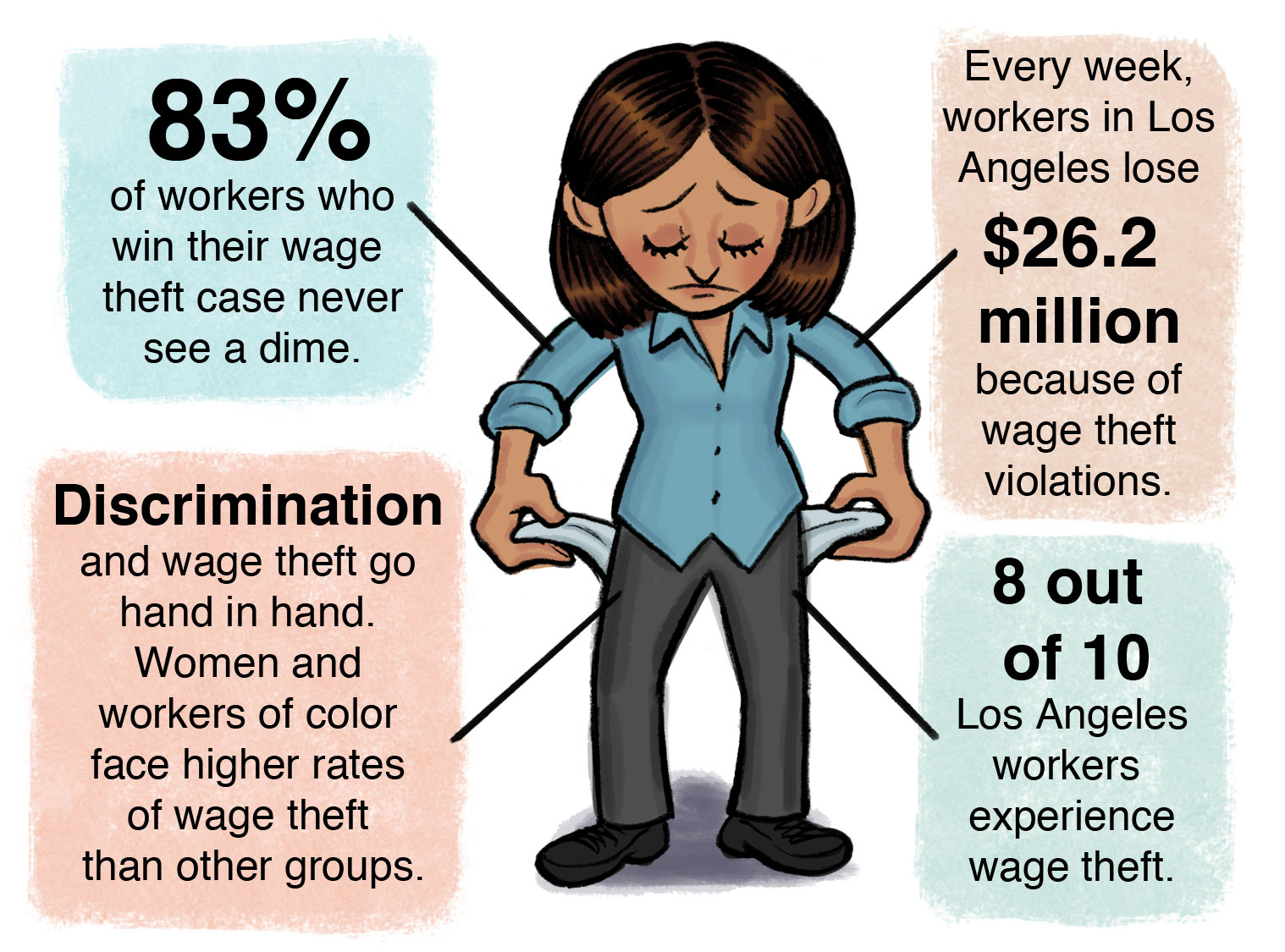 Wage theft has huge consequences for workers across industries who are just looking to receive a fair day’s pay for a fair day’s work. Just recently, the Los Angeles Times detailed the stories of 11 workers at a West Los Angeles bakery were paid just two dollars an hour over a two year period. Some of the workers were forced to work 17 hours a day.

Heriberto Zamora worked for one of the most expensive restaurants in the country, Beverly Hills’s acclaimed sushi restaurant Urasawa. Though he worked nearly 60 hours per week and 12-14 hour shifts, he did not receive overtime. When one day, after an eight hour shift, he asked to go home because he was sick, his boss fired him on the spot.

The California Labor Commissioner issued his employer a judgment to pay over $38,000 to Zamora and his coworkers, they found the law did not have teeth and he wasn’t able to collect. He finally received payment, after local organization Koreatown Immigrant Workers Alliance heavily advocated for him.

View NBC’s story about wage theft in the state of California.

Last year, landmark policies passed to help workers receive a fair day’s pay for a fair day’s work. When the Los Angeles City Council voted to raise the city’s minimum wage to $15/hour, it also voted to establish a new Office of Wage Standards to enforce wage and hour violations. In addition, as cities across California raised their minimum wages, nearly all of them established wage theft offices.

On the state level, California passed SB 588, which enacted new tools for the California Labor Commissioner to be able to collect on behalf of workers.

Now, the rubber hits the road. Budget decisions happening now will determine how wage theft enforcement will happen and if it will be efficient and effective.

Workers whose employers have failed to pay them face serious challenges in recovering their hard-earned wages. To a worker who has lost hundreds, if not thousands of dollars in unpaid wages, winning a judgment is often at best a hollow victory. Non-payment or underpayment of wages remains rampant nationwide.

Drawing on a survey of more than 4,000 workers in low-wage industries in the three largest U.S. cities — Chicago, Los Angeles, and New York — this report focuses on the results for L.A. County. Among its findings, every week in Los Angeles low-wage workers lose $26.2 million dollars in wage theft violations.

A landmark survey of 4,387 workers in low-wage industries in the three largest U.S. cities—Chicago, Los Angeles, and New York City.

September 4, 2015 – Los Angeles Times – Few Wage Theft Victims Ever Get Their Back Pay