The Justice for Janitors movement has helped low-wage workers achieve social and economic justice, the comprehensive campaign not only earned the broad-based support, but employed diverse research strategies to illustrate the janitors’ counternarratives and the ways in which the community is impacted by their struggle.

The Justice for Janitors movement was catapulted onto the national scene, workers deepened their resolve for a more just way of living, and they won our first union contract. Thousands of workers were lifted out of poverty. The videos below capture aspects of the movement and the support of communities.

The comprehensive Justice for Janitors campaign brought together different organizations, policymakers, and community leaders to collectively advocate with the workers. The videos below capture the development of the campaign and the support gained over time.

The Justice for Janitors campaign largely focused on affirming the experiences and challenges of the workers. The personal narratives were a powerful tool in creating campaign momentum and personalizing the struggle of the worker.

Preserving Memory: Working to Remember when Janitors Took to the Streets and Transformed L.A. History

Educators at UCLA are worked together with an L.A. union to remember three memorable weeks of struggle on the streets of L.A. when the city’s labor history changed forever. In 1990 members of the Service Employees International Union launched the “Justice for Janitors” campaign. Their red t-shirts came to symbolize the rising of some of the city’s lowest-paid employees, workers who were considered “unorganizable” by many labor leaders.

Their strike and public protest capped a campaign begun five years earlier, and transformed the California labor movement, helping to bring livable wages, health benefits and basic labor protections to members of the workforce dominated by poor immigrants. Now a group of researchers and archivists at UCLA’s Department of History and the university’s Labor Center are calling on the public to help in an effort to preserve the memory of this seminal event for future generations.  Explore aspects of the project in this section, you can also download the press release. 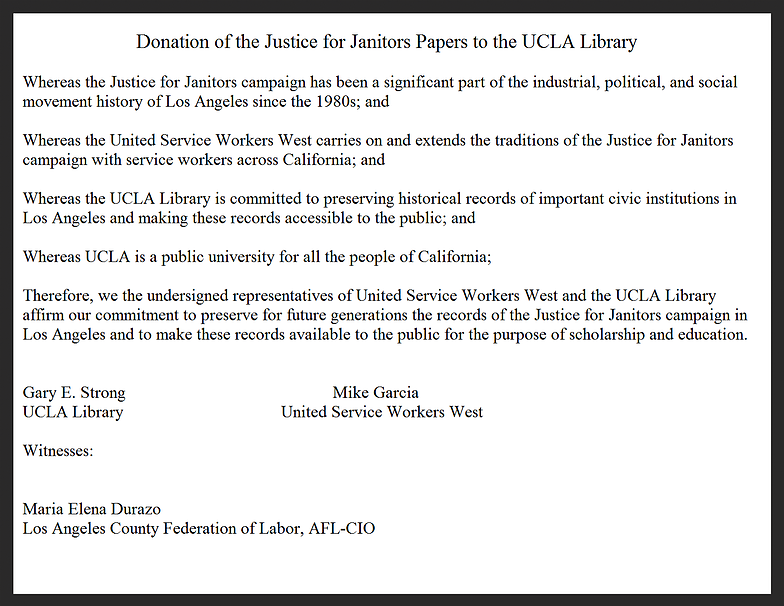