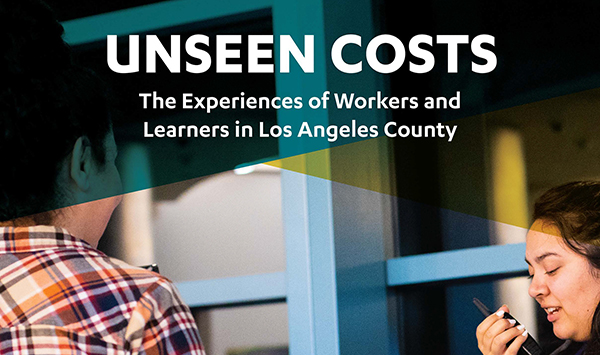 A new report from the UCLA Labor Center, a unit of the Institute for Research on Labor and Employment, in partnership with the Dolores Huerta Labor Institute, of the Los Angeles Community College District, finds that half of college students are “workers and learners” who work long hours for low wages while grappling with rising college costs and living expenses. While most studies of working learners focus on either their academic or workplace circumstances, Unseen Costs: The Experiences of Workers and Learners in Los Angeles County examines the challenges that lie at the intersection of higher education and labor.

“The exorbitant costs of living in Los Angeles County coupled with the rising costs of higher education make it difficult for workers and learners to access basic necessities and impossible for two-thirds of their parents to support their education. And this was true even before we were facing an unprecedented health and economic crisis,” said Mindy Chen, report co-author and co-director of the Dolores Huerta Labor Institute at Los Angeles Community College District.

“There was a time when a student could graduate from college with little-to-no debt, a living-wage job, and a path to homeownership,” said Saba Waheed, report co-author and Research Director at the UCLA Labor Center. “Now, half of the college students work almost entirely in low-wage jobs and unconnected to their academic and career goals. If we care about the future of Los Angeles, then we need to care about the futures of workers and learners.”

Three quarters do not have access to an internship that will facilitate reaching their educational and career ambitions. Workers and learners aspire for academic success, but work and financial responsibilities serve as constraints. 69% miss at least one educational opportunity due to work duties, and the stress of juggling competing demands has led 40% to consider withdrawing from school.

As Iris López, a worker and learner, explains,“My biggest concern has always been my ability to finance my education, because my mother is a single parent who works in the fields, I feel guilty asking for help because I know she is struggling herself. Education should not cost us our ability to eat or cause concern over how we’re going to pay for the next few units. This country needs to do better by its people.”

Researchers utilized a participatory and research justice approach, involving students, workers, and community partners in data collection and analysis. The report is based on 869 surveys and 75 interviews as well as government data, policies, and academic literature.

A supplementary research brief examining the impacts of COVID-19 on workers and learners, based on 236 additional surveys, found that:

Unseen Costs: The Experiences of Workers and Learners in Los Angeles County

A Survey of Los Angeles Workers and Learners During COVID-19